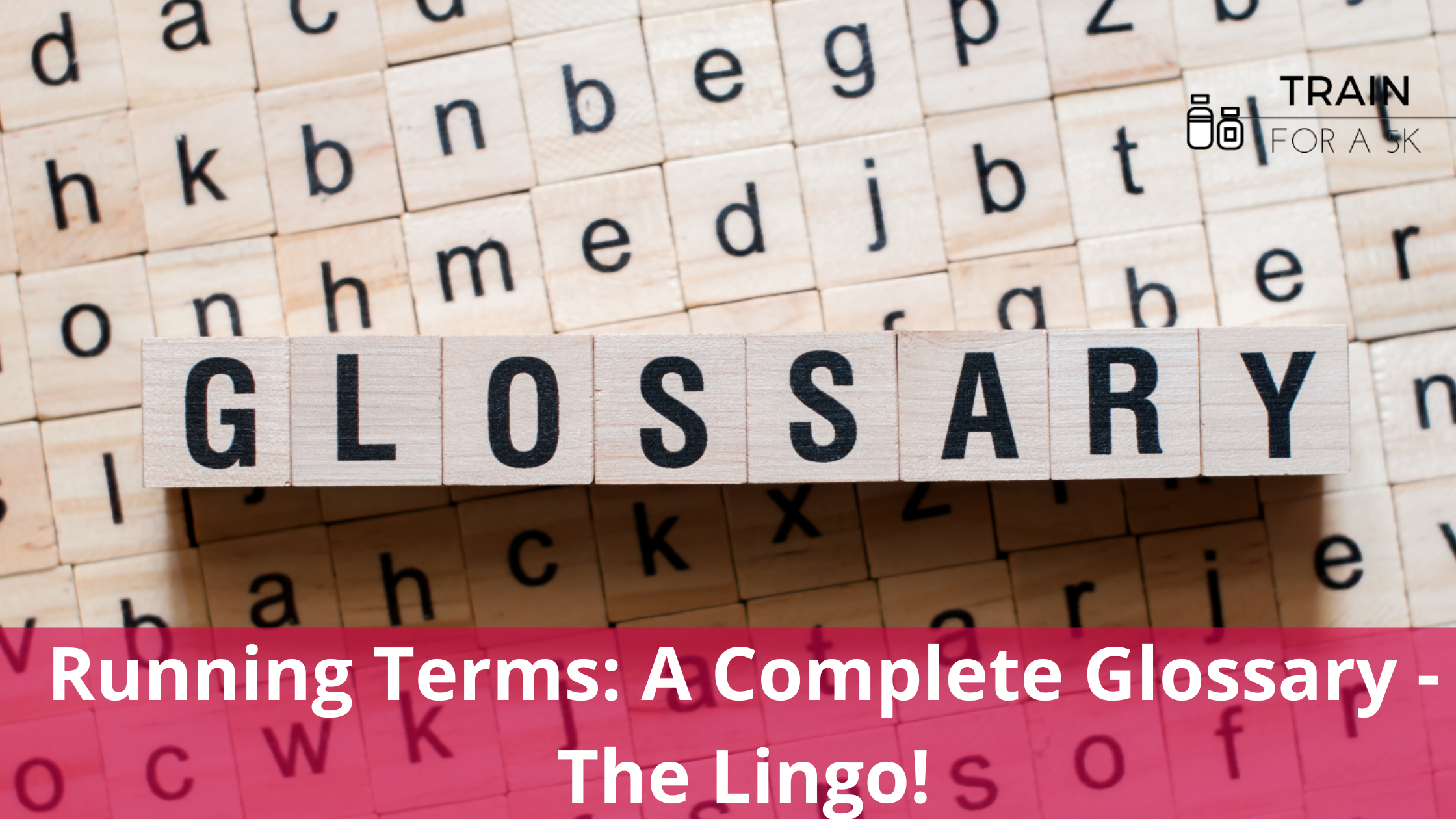 There are so many running terms out there, and if you've been in the game for 10+ years you might have picked up on most of them.

If you are just getting into running, then this complete running terms glossary will familiarize you with the most common running terms used nearly worldwide.

The 10-K pace is the average speed at which a runner ran their last 10-K race. It is different for every runner, depending on their running time and distance. For example, a 62-minute 10-K runner runs at 10 minutes per mile; for 31:00 runners it would be 5 minutes per mile; for Joshua Cheptegi (the world record holder), his 10k pace is 4:12/mile.

A quarter mile or 1 lap around a standard track. Try running one of these at an "all-out" effort to understand what true pain feels like.

A half-mile or 2 laps around a standard track. Try running one of these at an "all-out" effort to understand what even truer pain feels like.

A pace that is easy on the lungs and heart, and slow enough so that lactic acid does not accumulate in your muscles.

Running at a pace that is too fast for your respiratory and cardiovascular systems to deliver all or most of the oxygen required by your muscles can result in lactic acid buildup, which can lead to tiredness and a heavy feeling.

The transition phase between aerobic and anaerobic running is crucial for athletes, as it can help them use oxygen more efficiently. This results in less production of lactic acid, which is often a limiting factor in endurance sports.

See "hitting the wall."  Note: get to mile 18-20 in a marathon to truly understand what this is.

As a runner, your number of steps per minute can be influenced by various elements like height, weight, stride, and experience. Frequent runners usually take approximately 160-170 steps each minute, whereas elite runners might even hit 180.

Technology has been developed to sense and record the finishing times of all runners in a race. This is much more accurate than the old method of many runners finishing nearly at once in a big, crowded race. The chip is a tiny electronic chip that is programmed with your specific runner identification. You attach the chip to your shoe laces and send a signal to an electronic reading device when you cross the start line and again when you cross the finish line. Your time is automatically recorded and usually, you are asked to turn the chip back into the race organizers.

Slow running or jogging done after a workout or competition to circulate blood around the muscles.

The ability of a shoe to absorb the impact of foot strike. Hoka fans rejoice!

Delayed onset muscle soreness. This type of muscle soreness normally peaks about 48 hours after a particularly intense or long run. Runners will get this from lifting weights for the first time as well. Or even just doing strides (because we know you may not actually be doing strides regularly--but you should).

An athlete who has reached the highest level in his/her sport, but is probably not sponsored.

Swedish for "speed play;" variable pace running; a mixture of slow running, running at a moderate pace, and short, fast bursts. Fartlek training is a "creative way" to increase speed and endurance.

Your running form and posture are integral to preventing injuries and becoming faster. To maintain proper running form, keep your eyes forward, shoulders relaxed, elbows at a 90-degree angle, and torso upright. Some coaches refer to the latter as “running tall.”

The impact of your foot on the ground. To strike the surface with the middle of your foot in light strides that fall directly beneath your hips.

Similar to "bonk", it is the dreaded point (and awful feeling similar to what your body would feel like if you ran into a wall) during a race when your muscle glycogen stores become depleted and a feeling of fatigue engulfs you.

International Olympic Committee. More information can be found at www.olympic.org.

Interval training is a type of exercise that helps improve speed and endurance. It typically consists of short, fast repetitions followed by longer, slower repetitions for recovery. This type of training is based on a rigid format, such as "six times 400 meters fast [these are the repeats] with 400-meter recovery jogs [the intervals]."

According to the IAAF, a junior is any athlete who is under 20 on December 31 of that year.

Running at a slow pace is often used in order to reach a weekly or monthly mileage total, as opposed to any specific benefits. Despite the name, "junk miles" often serve as recovery from harder workouts. The value of "junk miles" is still hotly debated among training theorists.

Lactic acid is a byproduct of the body's process of breaking down glucose. It is often associated with muscle fatigue and sore muscles.

Shoe shapes are determined by the shape of the last on which they are built. There are three basic shoe shapes: straight, curved, and semi-curved, but all three shapes vary from company to company as each company has it’s own last.

Refers to the outer edge of a shoe.

A performance-enhancing drug....just kidding! NOT the hallucinogen. LSD is an abbreviation for "Long, Slow Distance," which refers to the practice of running longer distances at an "easy" pace rather than shorter ones to exhaustion. The slower pace allows the runner to go longer and, therefore (supposedly), gain more fitness. This comes from the 70s, so take from that what you will.

26.2 miles; According to legend, in 490 B.C., a Greek soldier name Philippides ran the distance from the site of the battle of Marathon to Athens, where he died after the Greek victory over the Persians.

An athlete 40 years of age or older is designated a "master" in the U.S. Many other countries use the term "veteran."

The highest heart rate is reached during a specified period of time.

Referring to the inner side (or arch side) of a shoe.

1500m, the international racing distance closest to the imperial mile (1609m). This is what most will race on an official track circuit.

Midsoles typically consist of a thick layer of foam (typically EVA, Nitrogen infused, etc.) between the upper and outsole, which provides cushioning. Some midsoles also feature additional paddings such as air, gel, or embedded plastic units.

The ability of a shoe to limit overpronation.

Running the second half of a race faster than the first half.

The bottom of most running shoes is made of hard carbon rubber. This layer of the shoe contacts the ground and provides stability for runners.

Many runners suffering from running injuries are believed to have overpronation, which is an excessive inward roll of the foot before toe-off.

This term is how long it takes you to run a mile (or kilometer). You’ll often hear this in reference to different types of runs, like “5K pace” or “marathon pace.”

During a run, accelerations (also called pick-ups) can be done in shorter durations than fartleks to add some excitement. This can help keep your day interesting and prevent it from being too easy.

Jumping exercises in which the jumper lands on both feet are beneficial for overall fitness.

A firmer density of midsole material added to the inner side of the shoe. A post is designed to reduce overpronation.

In the United States, a high school athlete who has completed preparatory school is referred to as a "junior." This differs from the IAAF definition of "Junior" which refers to athletes who have not yet reached their 18th birthday.

After the heel contacts the ground, pronation begins immediately. This is a normal and necessary motion for walking or running.

Road Runners Club of America. More information can be found at www.rrca.org.

These days off are referred to as "days off" in the fitness industry. They're important for maintaining a healthy and consistent exercise regimen. Active recovery, corrective exercises, stretching, walking, and leisure activities should be done on rest days to keep your muscles active and functioning properly. Often times, runners will do strength training on off days.

Shoes that provide a good ride are known to be comfortable and supportive. They help distribute the runner's weight evenly, which in turn reduces shock and discomfort throughout the run.

Some people feel an intense exhilaration and well-being when running vigorously, apparently related to the secretion of endorphins. I wrote a whole article about runner's high.

Common injury for many runner's, relates to excessive pain around the knee.

Running economy is the ability to use a smaller percentage of your maximum oxygen utilization. When you improve your economy, you can run at a lower intensity without sacrificing running performance.

Refers to your times at mile markers or other pre-planned checkpoints along the way to the finish line.

The ability of a shoe to resist excessive foot motion

Short, fast, but controlled runs of 50 to 150 meters. Strides, which are used both in training and to warm up before a race, build speed and efficiency.

Over supination occurs when the foot remains on its outside edge after heel strike instead of pronating. A true over supinating foot under pronates or does not pronate at all, so it doesn't absorb shock well and can be a cause of injury. It is a rare condition occurring in less than 1 percent of runners

Many runners typically reduce mileage or taper one day to three weeks before a big race. This helps the muscles rest so that they are ready for peak performance on race day. See - What is Tapering.

The range of heart rates that can be achieved during aerobic training enables an athlete to maximize the benefits of the workout.

Tempo runs are typically run at a slower pace than 10-K race pace, with the goal of running at a speed that is about midway between short-interval training speed and your easy running pace. These are often included in most training plans.

Running at a pace that is slightly slower than your 10-K race pace will help you stay in the lactate threshold zone. This means that your muscles will not fatigue as quickly, and you may be able to run faster in the future.

The front portion of a shoe's upper. A wide toebox allows plenty of room for the toes to spread.

The leather, knit, or mesh material encloses the foot.

USA Track and Field. More information can be found at www.usatf.org.

International term similar to "master" in the U.S. According to the IAAF, men become "veterans" on their 40th birthday; women, on their 35th birthday.

The maximal amount of oxygen that a person can extract from the atmosphere and then transport and use in the body's tissues. Essentially, how much oxygen your body can use to create energy.

Five to twenty minutes of easy jogging/walking before a race or a workout. The point of a warm-up is to raise one's heart rate so the body (and its muscles) are looser before a tough workout begins.

For events in which formal world records are not kept, such as races at 150m or non-standard distances, the "recorded best time" is considered the world's fastest time.