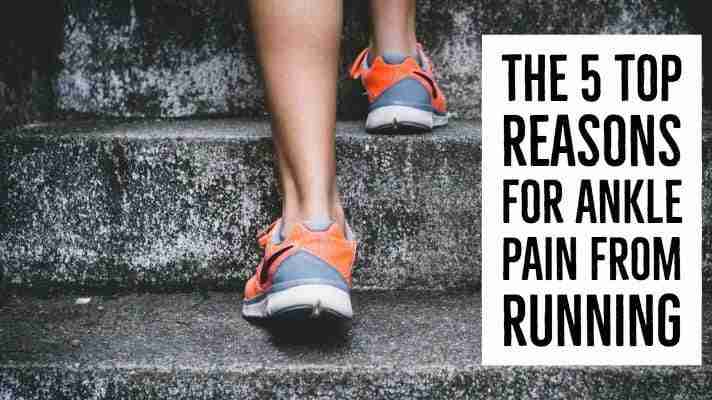 The ankle is made up of two joints: the ankle joint and the subtalar joint. These joints are in charge of your ankle's upward and downward movements, as well as its sideways mobility.

Your ankle joints are held together by three other bones. Your tibia, also known as the shin bone, is one of them. The fibula lies alongside your shin bone, while the talus sits above it. Ligaments, tendons, and muscles work together to support your ankle joint's stability and execute running motions.

I am going to dive into 5 reasons why your ankle hurts after running and what you can do about it.

Table of Contents
How does the ankle move when running?
What is Runner's Ankle
1. Ankle Strain or Sprain
2. Ankle Tendinitis
3. Tarsal Tunnel Syndrome
4. Improper Shoes
5. Overuse
Poor Running Form
Running with an ankle injury can create issues other places
5 Reasons Why You Have Ankle Pain from Running - Conclusion

How does the ankle move when running?

The ankle joint is an important component of the lower body when running, as it allows for a forward motion while also providing stability. During the gait cycle, your foot makes contact with the ground and rolls inwards slightly as your heel strikes the surface. This action is known as pronation and helps to absorb shock.

As you roll through pronation, your ankle joint is responsible for stabilizing the foot as you move forward.

When running, it is important to maintain proper form and ensure that your ankle remains supported throughout the gait cycle.

Poor form or inadequate support can lead to painful conditions such as plantar fasciitis, Achilles tendonitis, or even stress fractures in the ankles.

What is Runner's Ankle

Runner's ankle is a common complaint of runners. It is characterized by pain in the inner or outer part of the ankle joint, which can range from mild to severe. In some cases, Runner's ankle can be caused by an actual injury, such as a sprained ligament or strains, I detail the entire list below.

Many people don’t realize that having a lot of ankle pain in an ankle can actually mean there is a deeper problem.

Lots of runners like to think that they are invincible, but the fact of the matter is that someone can roll their ankle at any second, and it can sometimes take up to several weeks or months to heal if serious enough.

Ankle strains and sprains are some of the most common injuries athletes experience.

A sprained ankle occurs when a runner rolls, twists, or stretches their ankle too much to the point of causing damage to the ankle ligaments, which are short and strong bands of connective tissue that keep ankle bones in place. The achilles tendon is one of the most common tendons in your foot, when injured can create sever pain.

When damaged, ligaments need to heal properly to keep the ankle strong and stable for the future.

For a lot of people, a sprain or stress fracture can be more painful than a break because the muscles and ligaments are constantly in use and are stretched all the time.

Medical advice may suggest that you decrease inflammation with the nonsteroidal anti-inflammatory drug, Ibuprofen. Just make sure to consult your doctor before taking any sort of medication.

The best way to handle ankle strain or sprain after running is to rest, avoid too much walking or running, elevate the ankle above your heart, and ice the injury. Some do prefer to use heat, so it’s important to do whichever one is more comfortable for you.

Some find that wrapping athletic tape around the ankle sprain as a means for extra support can also help relieve stress on the healing ankle ligaments, but it is best to do simple strengthening exercises to aid in the recovery process or rest as stress fracture take time to heal.

If you are experiencing an ankle injury you should also try to exercise and keep ligaments flexible and strong. The University of Michigan Medical School recommends stretches such as range of motion exercises.

These can be simple things like attempting to trace each of the letters of the alphabet with one’s toes or doing toe crunches with a towel.

This video demonstrates how to do the alphabet stretches as well as a few additional exercises someone can do to improve their range of mobility.

According to the Mayo Clinic, tendinitis is the inflammation of a tendon. Tendons are fibrous collagen tissues that connect muscles to bone. They serve an important function throughout the body, especially in the joints.

Tendinitis has many different names in the athletic world because it is one of the most common injuries for both professionals and amateurs.

Some of these include tennis elbow, golfer’s elbow, swimmer’s shoulder, and jumper’s knee. The condition appears from regular muscle strain which occurs when someone repeats the same motion over and over again.

Tendinopathy is a lot like tendinitis, but it is a more severe version, as it is the degeneration of the collagen protein forming the tendon as opposed to just strictly inflammation.

Experts believe that tendinopathy may be just as common as tendinitis, but it often goes undiagnosed so it may be worth looking into.

With that digression aside, let’s get back to handling tendinitis.

Like sprains, the best way to deal with active tendinitis is to take it easy for a while. This can mean not running as frequently or taking it down a notch to relax. Icing the inflamed area is also recommended for enhanced recovery.

If you have Ankle pain radiating from the achilles tendon with severe symptoms should go see a doctor to make sure there isn’t an underlying condition causing the problem.

There are a few ways to prevent tendinitis from occurring:

This is a rarer cause of ankle pain than the other inclusions on this list but is still very common to see in runners.

According to Healthline, some of the symptoms of tarsal tunnel syndrome include sharp, stabbing pains around the foot and ankle, the feeling of pins and needles in the foot, and a burning sensation.

The syndrome is more likely to occur in people who have arthritis, diabetes, or previous ankle sprains and strains.

So, what can a runner do?

Unfortunately, there isn’t much that can be done to prevent it this type of ankle pain. Doctors recommend regular rest, stretching, and icing to deal with pain.

Taking at-home anti-inflammatory treatments can also help. In severe cases, surgery might be needed with a doctor’s recommendation.

When running shoes are worn down or not well suited for the individual it can cause a whole host of problems in the foot and ankle region leading to a ton of foot and ankle pain .

If the foam is old or unsupportive it can place excessive strain on the muscles, bones, tendons, and ligaments.

Injuries may include plantar fasciitis, and the other injuries listed above.

Running shoes should be comfortable and match the contours of a foot. This means that while there should be room for the skin to breathe, the shoe should not move around or squeeze the flesh tightly.

Many people actually wear shoes which are too large or too small since they don’t know what footwear should feel like.

It is recommended that you get fitted for a pair of shoes at your local running store so you can get a good idea of how a running shoe should fit.

Wearing improper, worn down, or unsupportive shoes may lead to ankle injuries, so it is a well-advised idea to seek out the proper footwear.

People who can’t purchase a new pair of shoes might need to hold off on running until they can do so because messed up ligaments and tendons aren’t worth extra calorie burning and muscle building.

However, you can possibly negate some injury potential by running on softer, more forgiving surfaces like grass.

Believe it or not, it is EASY to run TOO much. Too much exercise can sap the muscles and make people more prone to injuries like sprains, strain, and inflammation.

To avoid this problem, the only thing runners can really do is take a break from more rigorous exercise.

Instead of going for a 5-mile run, an individual could take a short jog or go for a brisk walk. If the pain persists, then it might be time to rest for a few days.

To scratch the itch for exercise, one can always hop on the bike, do some yoga, or even enjoy a little core workout. These should only be done without pain.

Ankle pain and injuries are also commonly caused by improper running form. When you land on your heel, it puts unnecessary stress on your calf.

Try landing towards the back of your foot instead to evenly distribute the weight and reduce the risk of injury.  Overstriding is another issue that can be avoided by increasing stride length or improving feet striking.

Running with an ankle injury can create issues other places

When you're in the middle of a training plan and twist an ankle or develop some sort of ankle injury, it's tough to discipline yourself to take a break. All you want to do is pick up where you left off. However, if you don't give your ankle muscles and ligaments time to heal properly, more injuries will follow.

Rest days are extremely important during your training plan. When people overlook ankle instability, they often develop IT band syndrome without realizing it.

This happens because they start compensating for their ankle by using other muscles differently. This can also cause tightness in the hips and back. Be sure to do the pre-run stretches and post-run stretches as they can limit the risk of injury.

5 Reasons Why You Have Ankle Pain from Running - Conclusion

Ankle pain is common in runners and shouldn’t be ignored. Sufferers should take a break from more rigorous exercises, elevate the ankle above your heart, ice or apply heat to the joint, and in general, take it easy for a few days to make sure the pain doesn’t worsen.

So if your ankle hurts after running and it doesn’t go away after some rest and rehab at home, then it might be time to see a doctor, make sure there isn’t any serious injury.