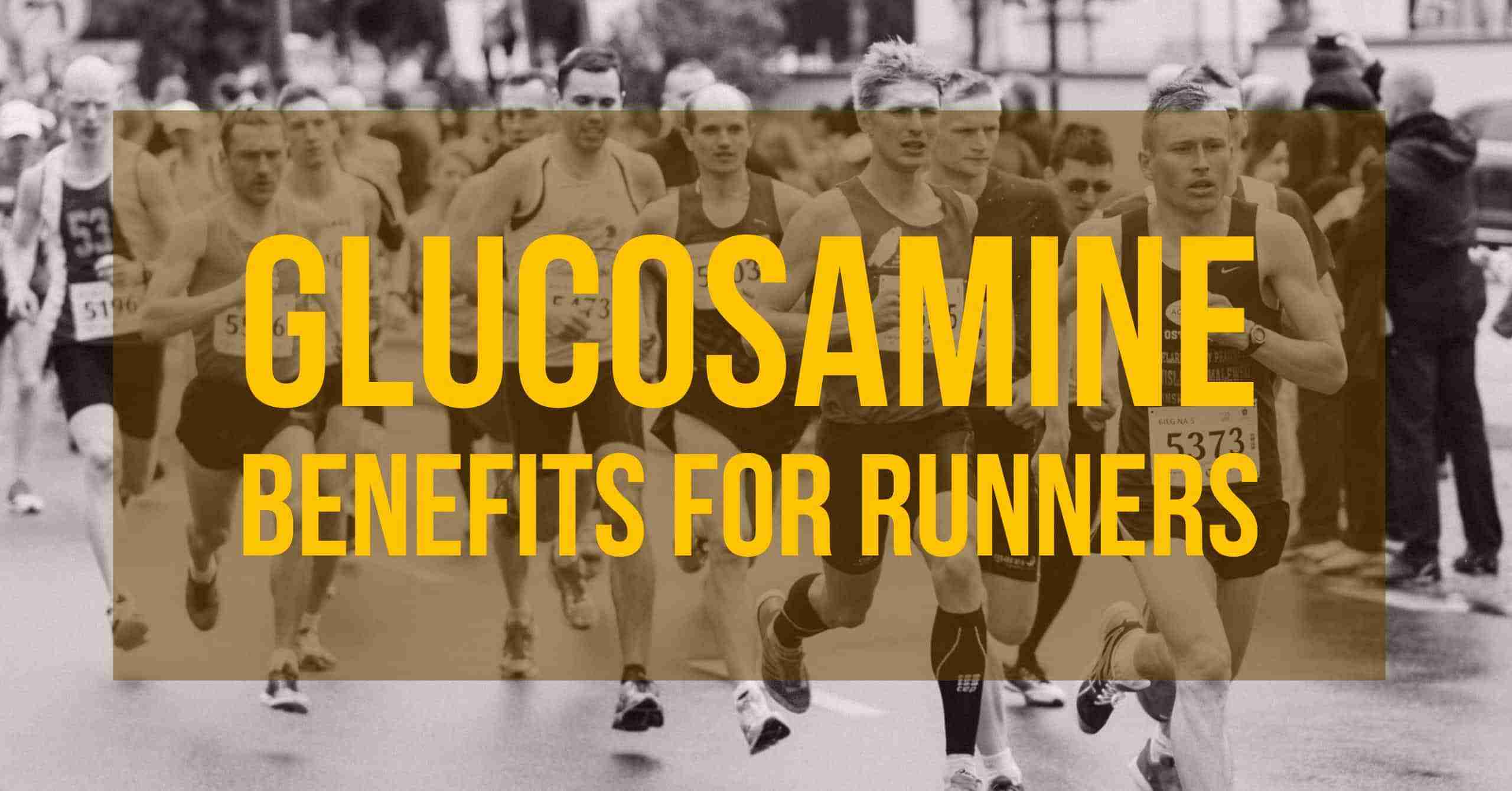 Glucosamine is a supplement that has been used for years to treat joint pain and stiffness.

A recent study found that glucosamine supplementation helped increase running performance in mice by increasing blood flow to their muscles. As I mentioned when I wrote about the creatine benefit for runners, humans aren't mice so let's take this finding with a few big grains of salt.

However, there are also human studies showing that supplemental glucosamine can reduce muscle damage after intense exercise and increase endurance in healthy people.

What does this mean for us runners who want to decrease injury risk or improve our training?

Let's take a closer look at the 9 Glucosamine Benefits for Runners:

1. Glucosamine May Reduce Muscle Damage and Improve Recovery after Exercise:

While the mechanism wasn't explicitly identified, it's believed that glucosamine works because it provides a precursor for the production of glycosaminoglycans (GAGs), which are structural components of articular cartilage and help to inhibit enzymes that cause tissue damage

Basically, GAGs play an important role in protecting against injury and promoting recovery after intense exercise. Unfortunately this study did not measure actual running performance so we don't know if glucosamine would help.

A 2012 study looked at the effects of supplementation with 1500 mg of glucosamine hydrochloride (GH) for 4 weeks on endurance and running performance in runners.

The study was Double-Blind, Placebo Controlled and Randomized; 28 male long distance runners were randomly assigned to receive either GH or a placebo every day during two consecutive four week periods separated by a month off from training. During each 4-week treatment phase, participants kept a training log and performed an incremental treadmill test to exhaustion before being tested for their time until exhaustion after ingestion of either GH or placebo. Running economy was also measured during a submaximal treadmill run.

The results showed that runners' performance was improved by a GH/placebo switch, but not between the two 4-week treatment periods within each participant. In other words, runners performed better when they ingested GH before their first treadmill test, but after a month of avoiding supplementation and training there was no difference in running economy or performance between the two study periods.

So while GH supplementation improved endurance performance during this study it's possible that further studies will find that 4 weeks is not long enough for noticeable positive effects on performance to occur.

While we don't have good evidence from human studies to support this conclusion, animal studies do provide some clues to how glucosamine might reduce injury risk. For example, a 2013 study showed that supplementation with glucosamine reduced muscle damage and inflammation in mice.

Additionally, a 2001 study showed that when rats suffered from osteoarthritis they also had high levels of creatine kinase (CK), an indicator of muscle damage [5] . In this case researchers gave the rats supplemental chondroitin sulfate along with glucosamine and found that CK levels decreased.

The effects of GH on running economy in humans have been tested quite a few times but results have been mixed so it's not clear if it can help or not. A 2008 study looked at how GH affected runners' economy at various paces and reported that GH supplementation led to an improvement in running economy.

However, a 2007 study found that supplemental GH did not improve running economy at the same speeds as this 2008 study.

This discrepancy could be due to differences in dosage (1500 mg/day vs. 400 mg/day) and types of glucosamine used (GH vs. glucosamine sulfate), or it may suggest that GH has little effect on endurance performance because running economy doesn't seem to be improved by supplementation with either type of glucosamine.

A 2010 review looked at several studies to determine whether there was any evidence that the traditional use of glucosamine for treatment of joint pain could be helpful in the treatment of exercise-induced muscle soreness.

The review concluded that GH supplementation does indeed reduce post-exercise muscle soreness, but more research is needed to determine whether GH can help athletes recover from intense exercise.

6. Glucosamine May Reduce Pro-Inflammatory Markers: In a 2013 study researchers compared the effect of glucosamine supplementation on blood levels of C-reactive protein (CRP) and other proteins involved in inflammation.

In the glucosamine sulfate group CRP levels were lower between week 1 and week 4 compared to placebo, but at week 16 there was no difference from the placebo. In the ibuprofen group researchers saw a reduction in CRP levels from weeks 1-4, but at week 16 CRP levels had returned to baseline.

There was also a small reduction in TNF-alpha production by monocytes but this effect disappeared four weeks after treatment ended. Researchers concluded that glucosamine supplementation may have anti-inflammatory effects on joint tissues, but this effect may not last more than a few months of continuous supplementation.

Since GH is used to treat GH deficiency in children, researchers have tested the effect of GH on bone mass and found it can increase bone mineral density (BMD) and improve bone strength.

This study looked at the effect of glucosamine supplementation on BMD and other markers involved in maintaining healthy bones. The researchers concluded that glucosamine sulfate supplementation may be helpful for increasing BMD and improving bone geometry, but additional research is needed to confirm these findings.

8. Glucosamine May Improve Quality Of Life:

A 2009 review reported that glucosamine supplementation seems to help reduce symptoms associated with knee osteoarthritis such as pain, stiffness, and physical function.

A 2005 systematic review looked at the use of glucosamine in knee joint conditions and reported that glucosamine can reduce pain but is not as effective as ibuprofen or indomethacin, which are anti-inflammatory medications.

Two 2013 studies assessed the effects of GH on rheumatoid arthritis (RA) and found some improvement in disease activity scores with oral administration, but these improvements were not significant enough to make a clear distinction between changes due to placebo effect.

Is glucosamine/chondroitin good for runners?

The research on glucosamine and chondroitin largely supports their use as a safe supplement for knee osteoarthritis, which is one of the main causes of pain in runners' knees.

Although we lack double-blind studies demonstrating that glucosamine and chondroitin work specifically for running-related knee pain, anecdotally it seems like many runners benefit from its use—and those who don't generally report no effect or worsening of symptoms (so self-experimentation should be your guide; if you notice no difference with use, as some runners do not, then stop taking it).

One study demonstrated that 3 grams per day of glucosamine sulfate increased the uptake of glucose into cartilage cells by 30 percent.

A 2008 review found several small studies suggesting significant improvement in pain, but not enough to produce a good understanding of glucosamine's effect on symptoms of OA.

The same authors reviewed trials evaluating glucosamine for hip or knee OA in 2012 and found 11 high-quality studies (considered the gold standard) showing no significant benefits for symptoms for glucosamine compared with placebo when used alone or combined with NSAIDs (such as aspirin and ibuprofen).

The bottom line: For minimal benefit and possible risk, don't bother with glucosamine — especially without chondroitin — because we don't know how much is actually being absorbed into joints where it might do some.

If taken alone, glucosamine sulfate may have a slightly beneficial effect on pain and function in people with knee osteoarthritis. For those taking both glucosamine and chondroitin, it's not clear if the combination has an advantage over either alone or whether they work better than placebo.

In another study from 2008, British researchers demonstrated that taking 3 grams of glucosamine daily resulted in significantly less knee joint space narrowing compared to a placebo among participants with chronic running-related leg pain.

In other research on patients with significant osteoarthritis, however, the results were not as positive.

One large randomized clinical trial reported no benefit of glucosamine compared with a placebo after two years of follow-up, while another 2012 meta-analysis suggested that glucosamine supplementation does not reduce pain or have an effect on narrowing of the space around the knee joint compared with placebo.

Glucosamine has been shown to improve symptoms in runners with runner's knee, but this treatment does not appear to be effective for patients with significant osteoarthritis.

All three studies are small and limited by restricted enrollment criteria (i.e., they only included people considered at high risk for side effects and excluded most women and older adults).

A larger study published in December 2010 found that glucosamine sulfate was safe and tolerable in a group of 820 older adults participating in a health maintenance organization — however, no difference was observed between groups taking glucosamine supplement versus placebo over six months' time with respect to NSAID use or joint pain.

The same study also reported that patients taking glucosamine were more likely to experience gastrointestinal side effects including nausea, heartburn, and diarrhea compared with those taking placebo.

It's not clear how glucosamine might help knee symptoms. Glucosamine is typically sold to relieve joint pain and improve joint function. Glucosamine sulfate is the only FDA-approved dietary supplement for osteoarthritis, but it is unproven whether it can slow or reverse cartilage damage in joints.

Glucosamine doesn't rebuild cartilage; there is some evidence that it may protect existing cartilage particularly in combination with chondroitin sulfate, but it's not clear if glucosamine supplementation alone reduces cartilage loss.

Glucosamine appears to offer some benefit for pain and function in people with knee osteoarthritis, but not necessarily those with more significant changes. It might also help ease symptoms associated with runner's knee.

On the other hand, glucosamine supplements have risks of side effects including gastrointestinal problems. More research is needed on long-term safety of glucosamine use as well as its effect on joint cartilage loss.