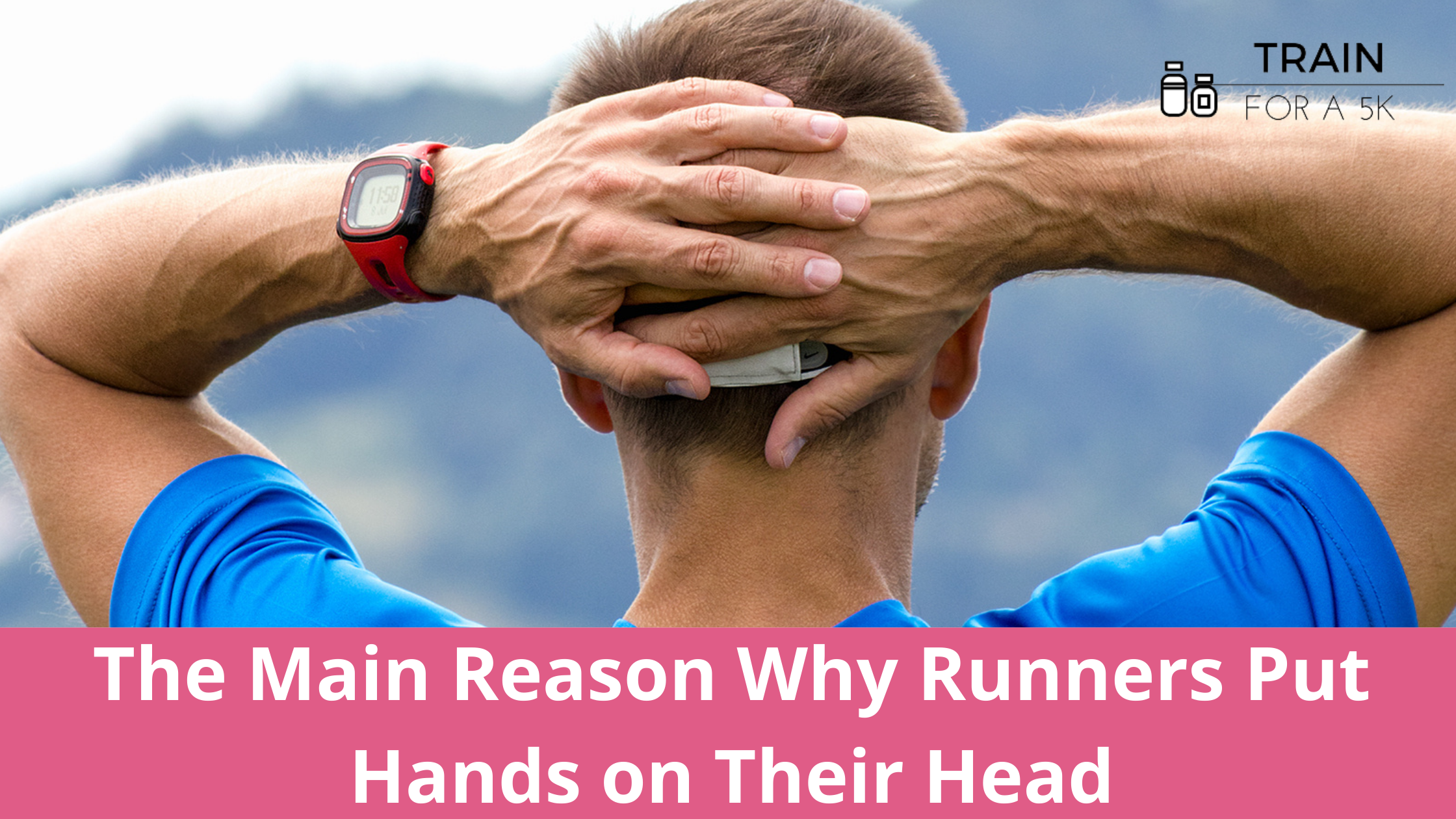 It’s entirely common to see a runner place their hands on top of their head after a hard running repetition or session.

It’s possible that you have done this yourself even after a hard hike, bike, or any cardiovascularly taxing exercise, but why do runners put their hands on their heads, and is it the most effective means of reoxygenating our bodies?

Runners put hands on their heads to allow oxygen back into their bodies after being in a state deprived of it through exercise.

While it works to a degree, recent studies have found that bending forward with your hands on knees may be more effective because it opens up your airway more efficiently and levels out your upper body with your heart, making it easier to circulate blood.

We can unpack this quite a bit, so let’s go over everything you need to know about why runners put hands on their heads.

3 Reasons Why Runners Put Hands on Their Head

1. Get Oxygen Back Into their Body

2. Circulate Blood Back Through their Body

Table of Contents
3 Reasons Why Runners Put Hands on Their Head
1. Get Oxygen Back Into their Body
2. Circulate Blood Back Through their Body
3. Slow the Heart Rate without Completely Stopping
What Hand Position Do We Mean and What Does It Do?
Is This Position Actually Effective?
Alternatives That May Be More Effective
Does putting hands on your head actually help you catch your breath?
Conclusion: Why Do Runners Put Hands on Their Head?
RELATED POSTS

What Hand Position Do We Mean and What Does It Do?

When we talk about runners putting their hands on their heads, we mean when they have elevated their arms by putting both hands over their heads to stay upright and tall to keep from collapsing forward after a hard bout of intense exercise. 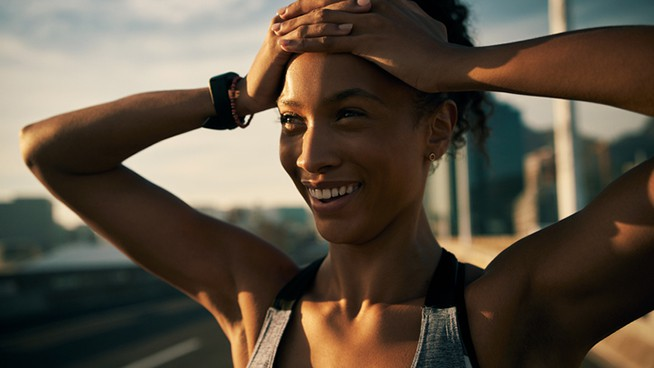 For many decades coaches have instructed their athletes to put their hands on their heads to stay upright and allow better airflow into the body as a means of optimizing recovery between hard bouts or at the end of a difficult race.

If you’ve ever run a cross country race, then you are probably all too familiar with the swarms of runners crossing the finish line and being told to “keep moving” and “put your hands on your head” to keep the finishers moving through the shoot to avoid a pileup of bodies.

Alternatively, you’ll see a coach instruct athletes to do this in between hard repetitions to optimize oxygen intake so you will be ready to perform your next repetition.

This is commonly accepted as the most effective method of recovering and getting back to homeostasis after a hard run. Furthermore, it really is an effective way to give exhausted athletes after a hard run to keep them upright and mentally engaged.

Is This Position Actually Effective?

The primary argument for placing hands on top of your head is that it aligns your body in a way to optimize oxygen intake when it's most needed.

Over the decades we can see that this method is obviously effective on some level, as plenty of athletes have been able to recover from hard running using this strategy.

It also serves as an excellent way to keep athletes from collapsing, as having hands-on heads nearly always provides enough leverage to prop your body up instead of collapsing forward and stopping completely in a finishing shoot of a crowded road or cross country race, where things could get out of hand quickly if people do not keep getting out of the way of incoming athletes.

By all standards, placing your hands on top of your head does help increase airflow, and also serves to keep runners upright so they do not collapse and give up.

This can have good physical and mental benefits, but it may not be the most effective method of recovery after an intense bout of physical exertion.

Let’s examine a recovery position that has recently taken over as the most effective means of reoxygenating your body.

Alternatives That May Be More Effective

You remember when you would finish a hard session and instinctively bend forward to place your hands on your knees and begin breathing heavily, well science now suggests that this position might be more effective for recovery after intense physical exercise. 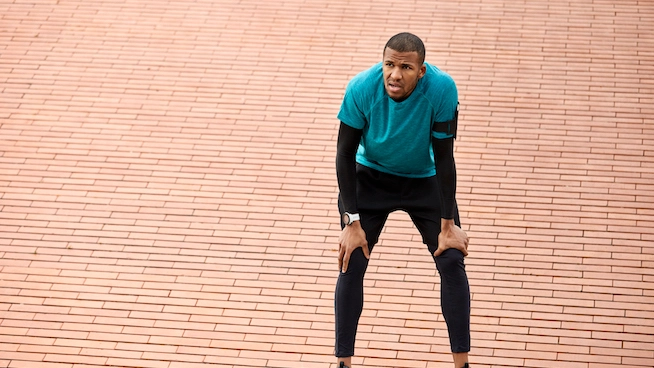 The argument for this is that it more properly opens your airway and places your lungs in a position to take in even more oxygen. This means it will expedite the recovery process even quicker than placing your hands over your head.

Furthermore, it is a more favorable position to let gravity aid in the recovery process. Because your head levels out with your heart, and the entirety of your upper body, blood can more effectively circulate to your head, and also through your entire body.

So we’ve established that bending forward with hands on knees is probably more physiologically effective at optimizing recovery, but what might be the possible flaws of taking this too seriously.

Well, as we spoke about earlier, placing hands on your heads is an effective cue at keeping exhausted runners upright and moving forward.

For a situation like the end of a crowded race, this should still be the standard because it keeps things moving forward and helps to avoid a bottleneck of runners at the finish like who have all collapsed forward with hands on knees (which does not make moving forward very easy).

There is also the mental aspect to take into consideration, as collapsing forward for oxygen in the middle of a workout might not be the most effective mental action to take.

Something can be said for staying upright in the middle of a workout in between hard repetition. It just keeps you more mentally engaged and prepared for the next repetition than giving in to collapsing forward.

Looking at this sensibly, it would be best to understand what situation you are in and make a sensible decision that fits what helps the most.

If you are at practice and finishing your last repetition, then collapsing forward may be a great way to expedite the immediate recovery process.

Conversely, if you are just finishing a crowded race with many runners not far behind, then you should probably be considerate and keep moving forward so you don’t contribute to a jam at the finish line.

Place your hands on your head until you get out of the way, then feel free to optimize your oxygen intake by bending forward with hands on your knees.

Does putting hands on your head actually help you catch your breath?

It's believed that the higher arm placement activates the diaphragm, which is a muscle found below your lungs and responsible for breathing. So, yes, it can be helpful to raise your arms overhead post-race

Conclusion: Why Do Runners Put Hands on Their Head?

After all is said and done, placing your hands on top of your head can be an effective way to recover after a hard bout of running, but in some cases, it may not be the best.

You can also look to place your hands on your knees to recover in a more efficient way. The best thing you can do is to experiment with what works best for you personally and examine your situation based on your surroundings.

Be mindful about your recovery, but also about what's going on with the people around you so you don’t impede the flow of runners.

3 Reasons Why Runners Put Hands on Their Head Post-Race
7 Reasons Why Running is Giving You a Headache
Do Runners Get Drunk Faster? You Bet (The Science Behind it)
Can Runners Take Ibuprofen? Everything You Need To Know
Top 12 Foods Runners Should Avoid
7 Benefits of Jogging in The Morning That Jump-Start You
Are Bagels Good For Runners? 3 Reasons Why
Icy Hot vs Biofreeze