You want to prove you’re as tough as the Ancient Greeks, so you’ve entered a Spartan race. Good luck.

According to the Ancient History Encyclopedia, Sparta was a Greek city-state best known for its militaristic culture and physical prowess. The region embodied natural athleticism and encouraged all members of the population to develop their skills. Men frequently lived in the military barracks from 14-30, while women had their own gyms in which to train.

A Spartan race embodies this culture.

Spartan races feature a diverse array of obstacles which truly test the abilities of runners and other athletes. For many people, they are momentous occasions and truly the pinnacle test of their physical abilities. Naturally, some choose to record this event.

Here is where the GoPros enter the picture.

Since their invention in 2002, GoPros have been a popular tool for athletes. The GoPro website explains that the original 35 mm. cameras were created so the inventor, Nick Woodman, could better record himself and his friends in a variety of environments.These small, lightweight cameras and recorders originally captured footage of surfing and skiing, but can be used for all athletic activities, including running.

If you want to bring a GoPro to your Spartan Race, there’s a few things you need to know.

This video demonstrates how a GoPro might be used by a runner during a Spartan race. Although the main athlete uses a hand mount, he also switches to a chest and head mount during obstacles.

Below are the top 5 tips for runners seeking to use a GoPro. The important thing to remember is that the GoPro should be a tool or ignorable decision for your run, not something that weighs you down and takes up precious time.

#1 Determine Whether You Want a Head or Chest mount

Every runner is different. Sometimes you might want to have your GoPro mounted on your chest to make sure you can tell the camera’s angle and know your equipment is safe. At other times, you might want it on your head so it’s not in the mud with you.

Runners are going to have different preferences, and that’s okay. The main factor between using a head or chest mount is what you intend to do with the footage.

Head mounts are conveniently out of the way and won’t add extra pressure to your chest. You do have to worry about your sweat making the mount slick, but it’s not a big concern. The downside to head mounts is that the GoPro will swivel when you turn your head. 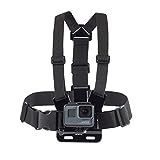 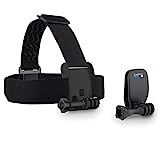 As an experiment, pick two objects and then turn to face each one at regular speed. You’ll notice that your head moves fast enough during the motion that the background and everything else you see is blurred. This distortion will appear the same on a GoPro, meaning runners will need to keep their necks stiff during the race if they want to use the footage later.

Chest mounts can also blur, but you would need to move your torso to do so. Runners know that they should keep their chests stable while running, so the distortion is less likely. The disadvantage is the extra pressure and weight on your chest.

GoPros aren’t heavy, but the additional mass can be annoying for many runners. A chest mount can also decrease mobility and make it more difficult to complete obstacles in a Spartan race which require climbing, crawling, or swinging.

When picking a mount, you should ultimately choose something that is comfortable for you.

Below are the most popular, highest reviewed and best value GoPro head mount, chest mount and full kit (which includes both head and chest).

Best GoPro Head Mount for Running in a Spartan Race or Tough Mudder.

Best GoPro Chest Mount for Running in a Spartan Race or Tough Mudder. 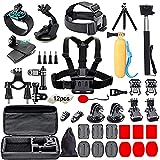 This sounds like common sense, but it’s something many runners forget. You’re going to be running through a lot of terrain and making a mess from the dust, dirt, and mud you kick up with your shoes. It’s important to keep the GoPro lens clean, so you have usable footage.

Mud, dust, and dirt don’t always wipe away easily. Because you will be sweaty and likely covered in the surrounding environment, your hands will just smear the materials around the lens.

Some runners suggest dedicating a part of clothing that doesn’t get dirty as easily to clean the lens. While this can work for a short while, all parts will become grimy eventually.

So, instead of using your sleeve, put some tissues in a sandwich bag and keep them in your pocket. Check your GoPro regularly as well. If it gets dirty, you can just pull out a tissue and clean it to your heart’s content.

The average GoPro battery lasts for two hours when filming at 30 fps. Depending on a runner’s preparation and athleticism, a Spartan race can take anywhere from one hour to most of a day. How is the battery supposed to survive with so much activity?

There’s a simple solution, but it’s one people tend to forget in the heat of the moment. Turn off the GoPro.

Runners who want to capture a Spartan race are probably only interested in the exciting bits. Many runners know that competing over long distances frequently comes with moments of downtime, or with sections that are boring.

To make your GoPro last the entire race, simply switch it off during these dull moments. When things heat up, you can turn it back on and capture your amazing uphill sprint.

Another way to conserve the GoPro battery is to adjust the quality of the film. Many devices can switch between 30 and 60 fps. While the activities captured with 60 fps will be clearer and have more detail, this setting does drain the battery fast.

Like before, alternate your settings based on the importance of each section of the race. If you’re crawling through mud or running through a field, clarity might not be as important.

This might seem odd when running, but you need to practice your filming and angles. Head and chest mounts change the angles which the GoPro captures, which affects your overall footage.

The chest mount will most likely take videos of that which is straight ahead. This is great if you want your audience to see the course, but comes with some downsides.

Some of the obstacles in a Spartan race require crawling, climbing, or navigating difficult terrain. You want to make sure the lens of your GoPro is not being obscured or dragged through mud and debris while you’re running.

If you want more fluidity, the head mount could work. Just remember not to turn too quickly. This type of mount also means you can capture footage of objects to your side, your feet, and even your friends.

If you want to capture footage of yourself, you can run with a handheld mount. The main obstacle to this is that you would need to hold on to it for the duration of the race.

Many sections of a Spartan race require runners to carry objects, climb, or swing from bars. Holding a mount at all times would be impossible, so you might need to practice capturing footage with a GoPro with a friend who will also be running.

#5. Determine If You Need Housing

This doesn’t refer to needing an apartment or condo. Housing is the casing for your GoPro that will protect it from the natural elements encountered during the Spartan race.

The main benefit of housing is that it is waterproof. During the Spartan race, many of the obstacles will involve mud or some kind of water element that can splash a GoPro. Although some devices are waterproof, the casing provides extra protection.

Housing can also prevent damage if the GoPro slips from its mount. The last thing you want is a trampled device, or the GoPro’s screen shattering from impact. Considering how much movement is involved in any sort of running, you should take as many steps as possible to preserve your electronics.

If you do go for a less expensive option, you want to be sure to check the quality first. Cheap products can be made out of more fragile materials and can shatter or crack under stress. If possible, ask if you can hold and examine options before making your decision.

This option also numerous questions answered by buyers so that will help you when making your decision. 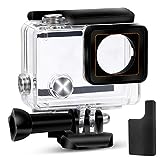 Before you shout “This is Sparta!” and begin your race, remember to practice and prepare. Incorporating a GoPro into a Spartan race can be fun and exciting, but it adds new elements to each activity.

With a little preparation, you can soon become the envy of all your friends and family by demonstrating your physical prowess through a GoPro video.