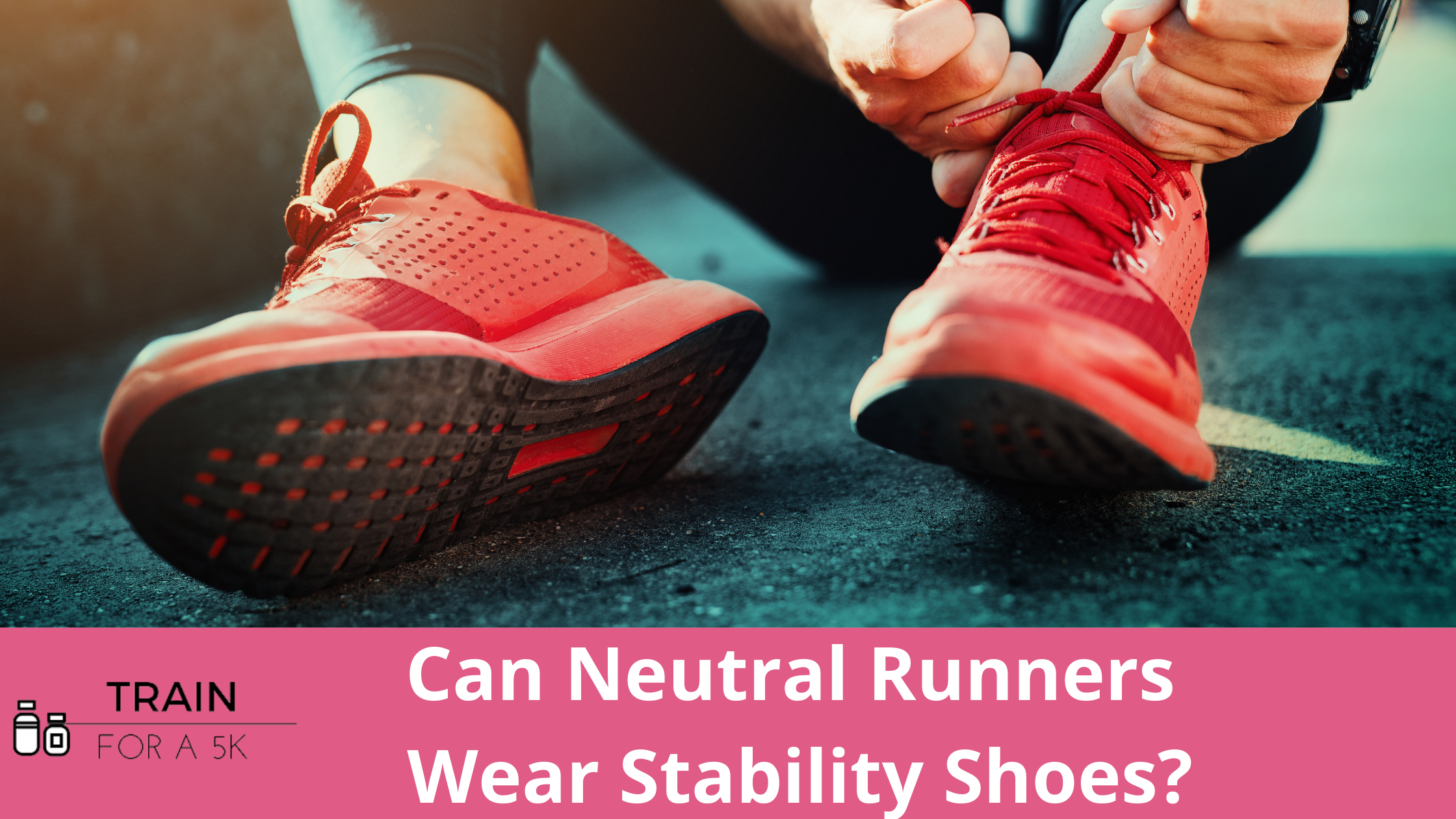 It is commonly thought that neutral runners should never incorporate stability shoes within their rotation because it will hinder the body’s gait cycle by stopping the healthy amount of natural pronation that occurs from the heel-to-toe off.

This may have been true to some extent at one point in time, but it does not tell the whole story.

Neutral runners may be able to or even benefit from wearing stability shoes from time to time in their training.

The last statement is also guilty of not telling the whole story, so let’s really break down why some neutral runners can (or should) include a stability shoe within their shoe rotation from time to time.

The Pedorthic Association of Canada (PAC) defines Overpronation as “a condition in which the foot rolls inward and down. The arch may elongate and collapse (or ‘fall’) and the heel will lean inward.”

Some of the common conditions observed in overpronators are:

The PAC goes on to note that overpronation should NOT be confused with pronation, which is “a normal movement of the foot during weight-bearing, allowing the foot to absorb shock as it contacts the ground.”

This is about the sweet spot that most runners seek to achieve, where there is just the right amount of pronation to displace the absorbed shock during the ground contact phase of the gait cycle.

On the other hand, the often less talked about condition is Underpronation.

PAC defines underpronation as “a condition commonly referred to as supination. An underpronated foot structure may have an abnormally high arch or instep that has very little flexibility when standing.

Strangely enough, common conditions observed in underpronators are similar to those found in overpronators.

Here are some of the conditions found in underpronators:

Now that we understand the working definitions of each word, we can talk about why neutral runners can (or can’t) wear neutral shoes.

We will look at the arguments for and against neutral runners wearing stability shoes, and come to a conclusion at the end based on the evidence provided by both arenas.

This is a little more than stability vs neutral, the crux of the argument for neutral runners not being able to wear stability shoes lies in the concern of “over correcting” one’s pronation through the gait cycle.

Think about it this way. If a neutral runner—who may already have slightly higher to medium arches—puts on a stability shoe with a solid block of posting on the medial (inner) side of the shoe, then the arches will be blocked by said posting. 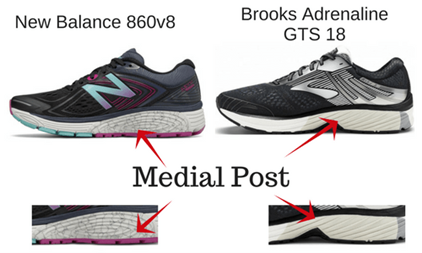 When your arches are blocked by the solid posting, this can either stop the process of pronation (which we know is actually a good and natural function in the body) or actually lead to overcorrection, which means the posting will actually push the foot outward and cause a neutral runner to start underpronating, or supinating.

This is quite honestly a sound argument, as someone who has worked in a specialty running store for years, I have learned that if someone is a neutral runner, then try not to give them any stability shoe that will overcorrect their form.

Why This Argument May Be Problematic - 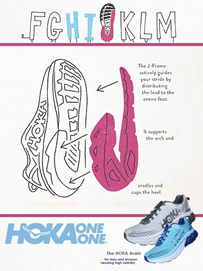 Although this argument does hold true in the past, the main problem with this statement is that nowadays stability shoes often do not include a solid block of posting filling in the medial arches of the shoes, but rather some form of guide or rails.

Instead of stopping pronation completely, these guides or rails actually just slow the overall rate of pronation through each downstep.

This allows your foot to still go through its cycle of pronation, it is just designed to make sure your muscles won’t get overworked through longer runs on tired legs.

Some good examples of these are in the Hoka One One J-Frame technology, and the Brooks Guiderails technology.

From this area we can probably infer that the argument may not be quite as simple as “neutral runners CAN’T wear stability shoes”, because with the new technology, these stability shoes more dynamic stability features that will not overcorrect form, but might even help a neutral runner who might start overpronation more near the end of a long run or hard workout. 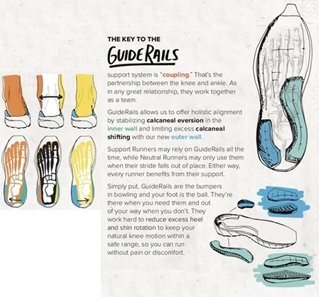 This leads us to the argument that neutral runners can wear stability shoes.

To get this out of the way early, I would say that generally neutral runners might want to stay clear of those traditional motion control or high end stability shoes that we were talking about.

This still becomes a case-by-case basis because essentially all feet are different, but a good rule of thumb is to not go for those solid blocks of posting, as they definitely could stop pronation, or even cause excessive supination. 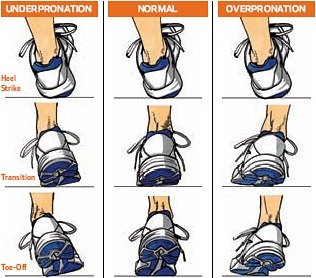 We prefaced this in the last section, but because of technology advancement over the last couple of years, we see that stability shoes generally do not include an overcorrective posting in the medial side of the shoe anymore, but actually include dynamic stability features that slow the rate of pronation instead of blocking it all together.

This is a game changer. By merely slowing the rate of pronation, the shoe still allows the foot to go through nearly a full range of motion, which has a couple of different benefits for neutral runners and the shoes they choose.

Modern stability shoes will usually not obstruct the natural range of pronation that a neutral runner goes through, but make sure that it does not get out of hand.

Believe it or not at the end of a run muscles do get tired and stop working quite as well, so even neutral runners can begin to overpronate if they do not have just a little extra help.

Slowing the rate of pronation lets all of the muscles get stronger, but it’ll keep pronation from developing into overpronation at the end of a run.

Why This Argument May Be Problematic -

Although this seems like a complete win for modern stability shoes, it is still important to note that not all stability shoes are created equal. It can sometimes be hard to note which new stability shoes provide just the right amount of support, or still overcorrect a neutral runner's transition.

With this in mind, the problem with this argument is that it once again generalizes the solution just enough to sound foolproof. However there are still caveats to consider. 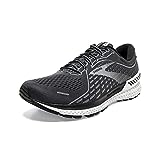 The most glaring consideration that needs to be made is to look at each case individually, sure most neutral runners might benefit from a modern stability shoe in their rotation for easy days or long runs, but definitely not all of them.

If you are a neutral runner considering a stability shoe make sure you try on a range of brands and models to find one that fits your personal needs.

After looking at both sides of the argument and taking modern stability technology into account I think that the answer is that generally, YES neutral runners CAN wear modern stability shoes.

Without blocking natural pronation or overcorrecting to underpronating, I think it is perfectly safe (and maybe even beneficial) for a neutral runner to wear a stability shoe from time to time, just to ease the stress of training and lower risk of injury.

Now, there is a difference between can and should, so of course not all will benefit from adding a modern stability shoe into the lineup.

If you have seen success wearing neutral shoes and have no real reason to change that, then I would say keep doing what works!

If you are new to running, intensifying your training, or coming back from an injury, then you may very well benefit from some extra support on your runs with a modern stability shoe.