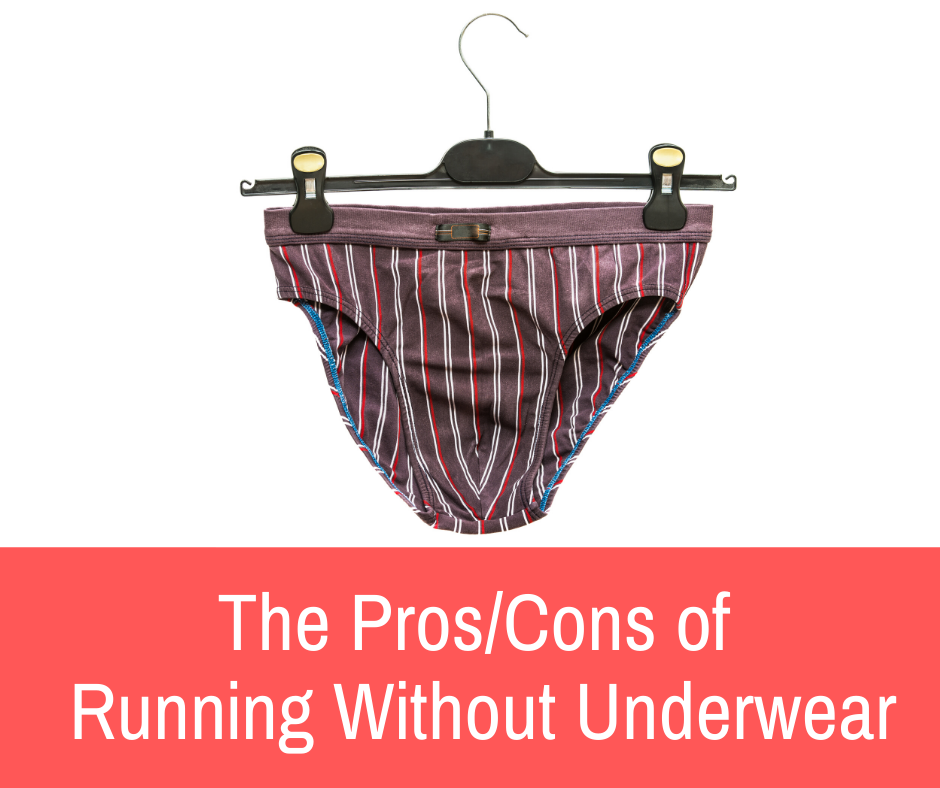 Have you ever put on a pair of sweatpants or compression leggings and headed out for a morning run, only to literally get your panties in a twist?

You'd be surprised by the number of people who thought "dang, I shouldn't have worn underwear!" in the middle of a running session.

This brings about the question: should you be wearing underwear under your running bottoms?

Well, some are pro undies while others rave about the benefits of going commando. So today, we're discussing the pros and cons of running without underwear.

Is it bad to run without underwear? Is it more comfortable? Perhaps there are some health risks involved?

Well, keep reading to find out the answers and more.

Pros of Running Without Underwear

A lot of men and women choose to go running without underwear as a solution to keep things breezy down there.

Wearing underwear adds an extra layer of fabric around your privates, which can lead to more sweating especially on hot days.

Not wearing underwear allows for more air circulation at your crotch, which reduces sweat and keeps it breathable.

2. Reduces the Risk of Infections

For women prone to getting yeast infections, running without underwear can help alleviate the issue.

Certain underwear can trap moisture in your lady parts, which increases the chances of developing yeast infections.

According to Dr. Kecia Gaither (OB/GYN), undergarments that aren't made of cotton or natural fiber don't allow breathability in the vaginal area.

This one's for the gentlemen out there – going commando while running may help protect your sperm.

When you wear underwear, everything is pushed up closer to the abdominal area which increases the temperature around your testicles, possibly killing heat-sensitive sperm.

This is only amplified by the heat generated from physical activity when running. However, without underwear, your privates remain cool and breathable.

A wedgie is bad, but a wedgie while running? Now, that's just torture.

If you even find yourself stopping mid-run to dig out a wedgie that's been literally a pain in your butt, perhaps it's time to consider going commando.

Running without underwear means you'll never have to interrupt your run to adjust your clothes, or worse, run through it.

If you're a fan of running in tight-fitting clothes, it may be good for you to skip the underwear scene every once in a while.

With undergarments that are too tight, your private parts are at a higher risk of irritation and chafing due to the continuous friction in the presence of moisture.

Who loves a visible panty line? That's right, no one. Actually, hating VPLs is something that most women have in common.

The embarrassment of someone pointing out in public is a terror we just don't want to deal with, and with the tight materials of running leggings, you're basically setting yourself up for a major VPL.

You could wear thongs to solve the issue, but let's be real, who wants to run wearing that?

Once again, going commando ensures you'll never have to worry about such an issue.

Another thing that ditching under can do is give you a shot of confidence to go out there and run your butt off.

You may feel more excited or even a bit sexier, and if that can motivate you to exercise, then by all means go ahead and go commando!

Underwear isn't only an extra layer of fabric under your running clothes, but it's also an added restriction that may compromise your flexibility and reduce your range of motion.

Running without underwear eliminates the potential restriction and gives you more room to stretch your strides.

Cons of Running Without Underwear

Without underwear catching all the sweat, discharge, and odors that you create while running, your leggings, shorts, or sweatpants are going to take the fall.

This means your workout bottoms will get a whole lot dirtier than normal, so you'll have to do more laundry than usual.

Rocking the commando vibe while running is great and all, but what about the inevitable mess of stains that'll end up on your clothing?

Whether caused by sweat, vaginal discharge, or any other bodily fluid down there, you'll have a hard time preventing stains that otherwise gets soaked up by underwear

Going commando is a huge no-no for women while on their period.

Sure, if your menstrual maintenance involves tampons or a diva cup, you could get away with wearing no panties, but what if you're a heavy flow lady or you like using pads?

During periods, all women will probably agree that anything can happen at any time, so it's always good to have an extra layer of protection on such days.

Yes, one of the pros of running without underwear is preventing chafing. However, if you wear outside clothing made of fabrics that are too rough, coarse, or thick, you may end up with chafing as the delicate skin down there rubs against it.

While you decide whether or not you should ditch the panties the next time you head out for a run, it's important to weigh out the pros and cons of running without underwear.

Yes, it can be good for your genital health, liberating, and all-around comfortable.

But you still need to keep an eye out for potential issues such as having stains on display, chafing because of wearing the wrong material, or the hassle of doing more laundry.