The VECTIV series is the new kid on the trail running block, made to complement each other and cover all your bases through trail training, working out, and racing.

Today we are taking a look at the VECTIV Infinite, which is the middle child made between the Enduris and Flight. It is a lightweight trainer designed to get you feeling fast and snappy on your trail runs. The goal was to create a shoe with plenty of stability, but also performance.

The dual-density midsole foam was specifically created to allow for the greatest amount of energy return while on the trails.

The North Face VECTIV Infinite promises a lot of versatile performance on the trail, but is it really all that it’s hyped up to be? Let’s dive in and find out! 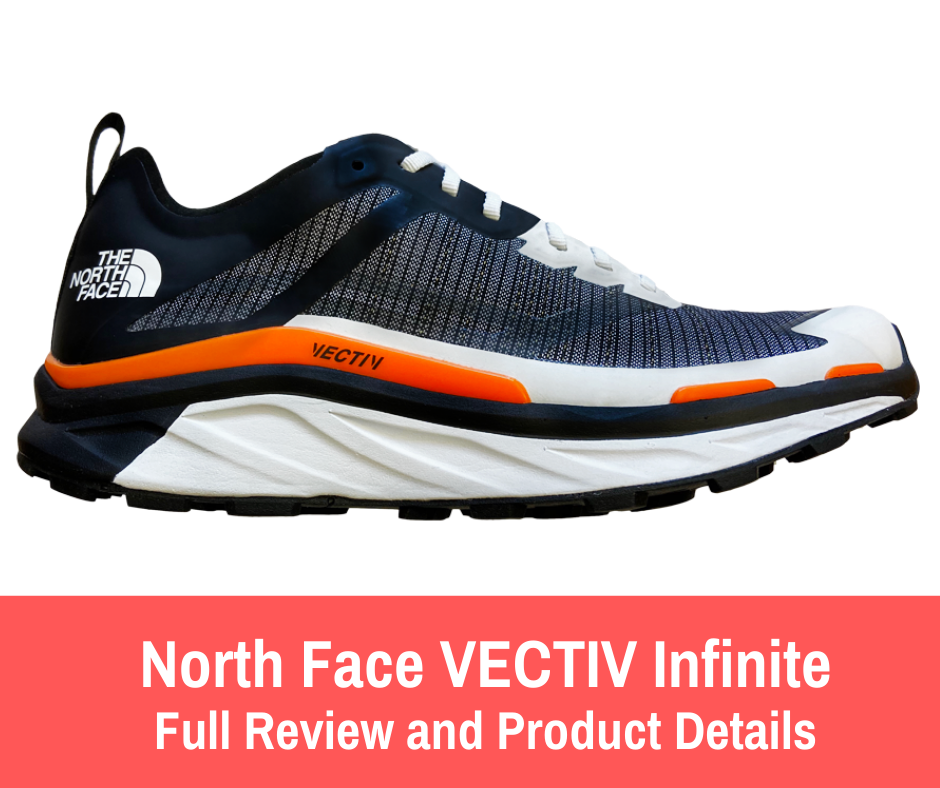 Right off of the bat, this shoe is anything but simple. There are a lot of parts making up the whole of this shoe, so we are going to take it one spec at a time to get you the most informative review as possible. 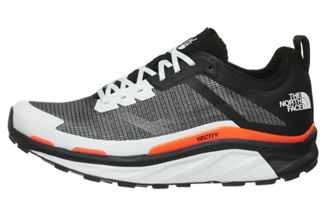 The bulk of the upper material is made up of a Reinforced knit upper which is made above all else to be breathable and provide an adaptable fit.

Your foot will get plenty of good airflow. In fact, if it is cold out you might want to think about wearing some thicker socks before lacing up so your feet do not get cold.

As an added lockdown component, there is a Matryx and Kevlar panel for abrasion-resistant midfoot stability. So this was a great addition, but I have noticed that these panels popped off a little bit when I got going downhills.

It did not feel like I lost any lockdown after this event, but it was disappointing to see the panels pop off so early in my run.

For more security around your ankle, there is a 3D-molded heel counter to lock you down just a little better. Funny enough it felt quite awkward and loose when I first laced up, but on all of my runs, it was never an issue. These runs included trails with steep downhills, uphills, and tight turns on pretty buffed-out terrain. 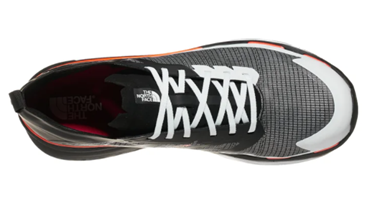 As some extra icing on the cake, the toe cap has been reinforced for added durability and protection. It’s nice to know that I won’t stub my toe and rip my shoe or bruise my toe. Furthermore the upper has been Reinforced Water Resistant, which is super nice when stepping in a puddle.

We should also talk about drainage. This shoe drains EXTREMELY well. After running through a puddle and soaking my feet it felt like nearly all of the moisture had drained after about a mile or so. For me, that is a great turnaround time.

DRAWBACK: Matryx and Kevlar panels can pop off.

This is where the magic happens.

The North Face has done a great job with constructing a midsole with a great blend of structural integrity while still maintaining high performance. This all starts with a Dual-density cushioning paired with a Rocker Geometry to ensure a responsive yet protective feel.

I could really feel an interesting forward roll, but it is specially constructed to roll from the lateral rear to the medial front, which was quite an interesting and foreign sensation.

It works along with the FORMFIT design to cradle your foot and enhance the performance of the Pebax plastic plate embedded in the foam to enhance propulsion. Between the forward roll and the slightly aggressive plate, there are quite a few sensations going on under your foot while out for a run.

All of this, and we haven’t even covered the part of the midsole that takes a spot in the very name of the shoe. This new VECTIV technology is interesting because it is a midsole foam designed for optimal energy return, but while running on the trail.

I can feel plenty of snap and bounce while running in the VECTIV Infinite. I also feel oddly supported by the frame the midsole creates for my foot. Even with every step on the trail being different, it still feels like the shoe finds a way to support my landing from any ankle.

Finishing off the midsole is the Ortholite X55 Footbed for a directly snappy underfoot sensation. I honestly could barely pinpoint this sensation while everything else was going on under my foot, but the whole thing blended together quite well. 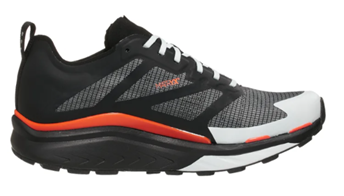 Coming in with 3.5 mm lugs, you’re going to get plenty of grip on most trails. Even running through the mud I felt fairly secure. There was some mild caking after the much solidified, but that was something I expected.

I think that the Surface Control rubber that North Face uses for the Infinite is a tacky rubber compound that offers some very good traction on some less than ideal surfaces. I do think it could be a little overkill on the lug depth though. Possibly adding to the weight more than it needs to.

POSITIVE: Amazing blend of energy return and stability while on the trail

DRAWBACK: You definitely know that you are wearing a shoe. Almost excessive amounts of different sensations going on.

So as far as the quality of performance goes, I think you are going to get a solid 400-500 miles in the North Face VECTIV Infinite. You will no doubt have plenty of amazing runs during this time frame and I think you’ll still be feeling that energy return up until that upper mileage end.

After that 500 mile mark, you can still probably enjoy the shoe, but I think much of the performance aspects of the Infinite will have regressed. There will be less traction, less “pop” in the midsole and the upper will have worn down a bit.

Being the middle child of the entire VECTIV series, the Infinite can pretty much do it all. If you get this shoe I expect you could use it as anything from an easy trail run shoe all the way to an ultramarathon race day shoe. It really hits enough points to get you nailing it for any sort of occasion.

Another factor to consider is the versatility of the midsole and outsole to be used on the roads a little bit as well. This is not to say it is a road running shoe by any means, but you could definitely wear this comfortably as a shoe you use to run 2-3 miles on the roads as you try to get to the trail running portion of your run.

I really like this aspect in my trainers. It is the kind of versatility that really lets you go anywhere in a single shoe.

No two ways around it, this shoe is well designed, comfortable, stable, and high performance. It checks all the boxes of being a great shoe!

Between the breathability and lockdown of the upper, the snappy and stable performance of the midsole, and the multi-direction traction from the outsole it feels like you have nearly endless options with the North Face VECTIV infinite.

Should You Get The North Face VECTIV Infinite?

I did touch upon this a little bit earlier, but the short answer is: totally!

I think this shoe is going to make most trail runners very happy, especially if you plan to use this as your sole trail running shoe. It will help you recover when you need it the most and then it can come back the very next day and help you get rolling up and down those trails fast!

My only reservation is for those who are looking at the VECTIV Infinite as a supplementary trail shoe, if you only think you’ll only use this shoe for mileage or workouts, then you can either opt for cheaper or more specific trail running shoe models on the market.