Are you a passionate runner?

If running is your favorite activity, how about participating in some races?

You may not be able to compete with the professionals, but there are many races for casual runners out there.

While running itself can be fun, how about giving a unique twist to your race? Color Run and Color Vibe are two races that can offer a memorable experience that you will remember for the rest of your lifetime.

These two events are similar because they involve paint of various colors, which has the goal of making the race even more fun.

In this article, I will be sharing the similarities and differences between a the Color Run against the Color Vibe.

The biggest difference is that Color Runs are more established than Color Vibe races making them higher attended.

Table of Contents
Color Run vs Color Vibe: The Main difference:
Is Color Run the Most Popular Race in the US?
Why Should You Try Color Vibe?
Color Run vs Color Vibe - What Are the Difference?
How Many Participants Does Each Race Have?
How Many Color Stations Do the Races Have?
What About the Courses?
Which Event Is More Expensive?
Can You Take Photos at the Events?
Who Is the Ultimate Winner?
RELATED POSTS

Is Color Run the Most Popular Race in the US?

Yes, all the parameters indicate that Color Run is the most popular race in the United States. The race was first held in 2011 in Phoenix, Arizona.

Today, it has become so popular that it is held in more than ten countries, including Canada, Australia, France, Germany, United Arab Emirates, Qatar, etc.

Travis Snyder is the creator of the Color Run. He is an event producer and a running enthusiast. The goal was to encourage both casual and professional runners to join the same event where the main target will be fun.

The basic thing you should know about this race is that there is no winner. It is a so-called untimed event, which means you can run for as long as you like and nobody will time you. The total length of the track is five kilometers (5,000 meters).

The twist is that there are color stations where you will be showered with colored powder.
In most cases, the main ingredient of the powder is corn starch, which means that the colors are edible.

Although you can wash your shoes with a bit of effort, it is recommended to take shoes you do not want to use anymore. Or at least a pair for which you won’t mind if they get dirty.

The organization committee also doesn’t share prizes, but they collect donations as a way of giving back to the community.

The Color Run finds a charity partner for each event they hold. In some cases, those are local facilities like food pantries and children hospitals.

Here are some tips if you are interested in signing up for a Color Run. 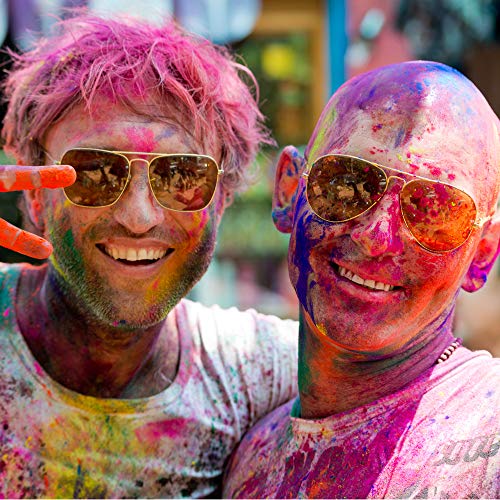 "About The Color Run"

Since the event has expanded to an international level, the company also worked with the Global Poverty Project and the American Childhood Cancer Organization.

Races often have sponsorships, and the participants might receive product samples or take part in giveaways organized during the event.

Putting the primary focus on fun is what makes The Color Run attractive for casual runners, professionals, and entire families. You do not even have to run – if it is easier, walk for five kilometers.

You will, however, need to purchase a ticket to participate in the event. The price may vary depending on the country and what is included with the ticket. However, you can expect the price to be approximately $45.

Why Should You Try Color Vibe?

Color Vibe is a race that is similar to the Color Run. Even the organization committee admits that they are the second-largest race of this type in the United States.

Additionally, they also have races in other countries, and the list includes Canada, Australia, Mexico, the Dominican Republic, and Italy. Color Vibe was founded by Mike Schaefer and David Knight. The first run was in 2011 in Utah and had around 2,000 participants.

It is all about having fun as there are no prizes or winners in this race. Color Vibe works with national and local charities to secure donations. The participants need to purchase a ticket, and they can receive their race packet at the event.

Once you are at the starting line, you will have the task of running (walking) five kilometers (3.1 miles) in a positive atmosphere and win music coming from the speakers.

You will have to run through color stations where the volunteers will spray you with edible colored powder.

Color Run vs Color Vibe - What Are the Difference?

As you can see, there are many similarities between the two races. They are both organized at the same 5K distance, and neither of them will track your time. The only goal at the races is to have fun and get sprayed with color. 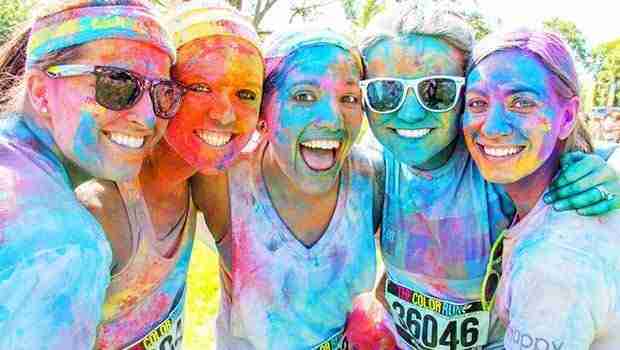 Both races also have color stations and use specialized color powder. The powder has cornstarch as the main ingredients, which is edible. Each race will have five or more color stations.

The organizers do everything in their power to ensure the colors are safe in every way. However, Color Run did have an isolated incident in Taiwan, where colored powder caused explosions that even had casualties.

Fortunately, that was the only time when such a thing happened, and it didn’t affect the popularity of the Color Run throughout the world. The company is doing its best to ensure that the participants can have fun without worrying about anything else.

While we are talking about fun, let’s mention that you can hear music from the speakers at all events. Additionally, you can expect a dance party and a lot of fun during the race, and once you cross the finish line.

How Many Participants Does Each Race Have?

Both races have thousands of participants for every event. Since both Color Run and Color Vibe have numerous races throughout the year, the total number of participants looks truly impressive.

It seems that the Color Vibe attracts fewer people, which is why you should consider it if you are a fan of smaller-scale races. However, that doesn’t mean the run is small or unattractive. You will still run next to thousands of other people.

If some of them are your friends, you can look forward to having even more fun!

How Many Color Stations Do the Races Have?

Although this may vary from one race to another, you can expect to pass through about five zones. The Color Run has more volunteers that will throw color packets at you, which means there is more chance you will end up quite colored at the finish line.

However, Color Vibe uses an interesting approach during some races. They place the first color station right near the start. As a result, you are immediately sucked into the atmosphere of a coloring race.

If you don’t like the color, you can always stick to the lane farthest from the throwers. And if you want to get showered with color, ask the volunteers and they will turn that wish into reality. Neither of the races is cheap on color, which is great.

What About the Courses?

It is hard to give an accurate estimate on which courses are better because they depend from the location. You can expect five kilometers of beautiful locations.

In most cases, there will be no hills because children and casual runners make the most of the participants. Nobody has a goal of making the course hard. Instead, you will usually run through campuses, parks, and other interesting locations in the city.

Which Event Is More Expensive?

Both Color Run VS Color Vibe offer similar prices. Depending on the location, you can expect to pay between $30-$50 to buy a race packet.

The good news is that most of the money will go to charities, which means you will not only have fun but also helping those in need.

Can You Take Photos at the Events?

Yes, you are free to take photos at both events. However, keep in mind that they may be used for promotion of the event without your consent. The Color Vibe has a team of professional photographers at every race.

They will post their photos to the photo booth, and you can access the entire base for free. If you do choose to bring your camera (or any other gadget), make sure to beware of the color. Putting it in the plastic bag may be the best way to protect it.

Who Is the Ultimate Winner?

It is hard to say which race is better because they are quite similar and offer a fun and family-friendly experience! It seems like Color Run crosses the finish line first because everything is at a larger scale than at Color Vibe events.

However, if you feel like having some fun, and you like getting showered with colored powder, feel free to sign up for both events. You will have an amazing time, especially if you gather your friends and go together!

Ultimately, the winners of the Color Run VS Color Vibe battle are participants. Whether you never run a 5K, or you are an experienced runner, you are set for a great time, so don’t hesitate to sign up for that race nearby!

What is Tapering in Running & How Does it Help You?
What to Wear for Cold Weather Running
20 Post Run Foods That You Should Eat
5 Benefits of Chia Seeds for Runners
Color Run vs Color Vibe – The Differences Explained
7 Helpful Tips for Staying Motivated for Your First 5K
Running Terms – A Complete Glossary For Beginners & Advanced
Stability vs. Neutral Shoes: Everything You Need to Know