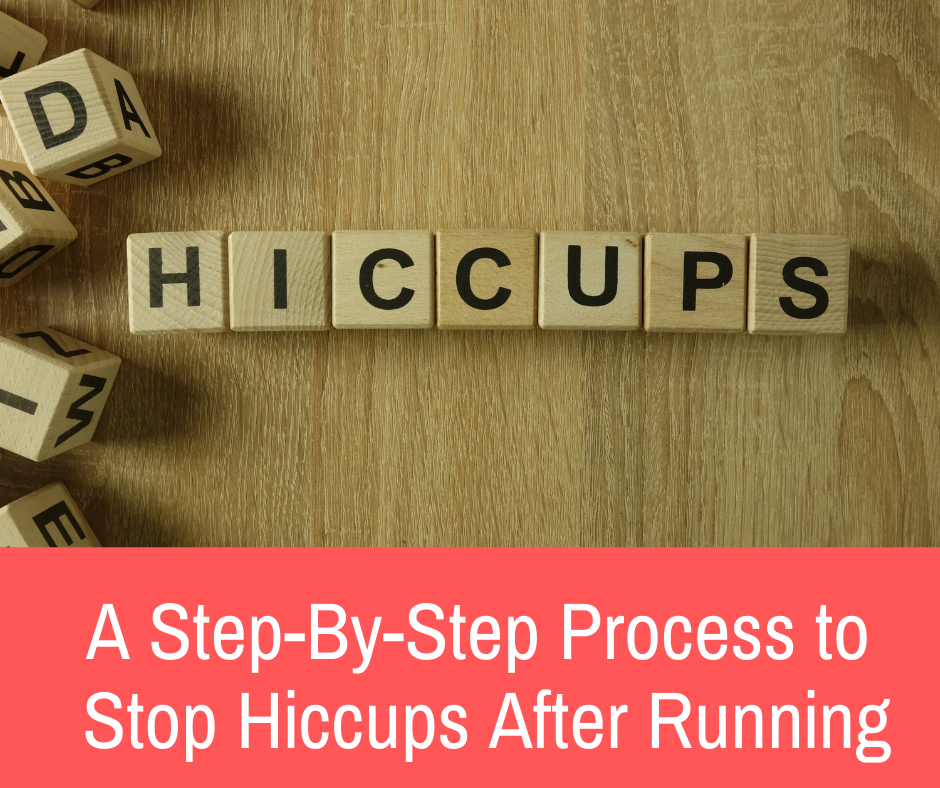 Hiccups are undoubtedly annoying. No one likes those continuous jerky movements or the incredibly embarrassing “hic” sound that comes with them.

But it turns out that it can actually be worse. Hiccups after workouts, and especially running, can disrupt your routine and deprive your body of the much-needed oxygen.

Worst of all, most of the home remedies, like biting on a lemon or drinking upside down, are impossible after running.

In this article, we’ll take a look at the alternative treatment for hiccups after running. I’ll also explain the most logical reasons why you can develop hiccups.

Stick around till the end to know how to avoid it altogether.

The Anatomy Behind Hiccups

Before we get to the treatment, we have to understand what happens in the body when you have the hiccups.

Hiccups happen as a result of cyclic spasms in the muscles of respiration, namely the diaphragm and intercostal muscles.

These spasms cause a sudden influx of air inside the lungs.

During this process, the glottis, the part of the larynx that carries the vocal folds, closes.

The quick and forceful inhalation colliding with the vocal folds is the culprit behind the jerky movement and the characteristic “hic” sound.

How do you react when you have a leg cramp as you’re running? You stretch it until it goes away, right? Well, that’s what you should do with hiccups.

Before you can stretch the diaphragm, you need to calm down and rest your body after running.

If you didn’t finish your routine yet, you’ll have to take a break and complete it later. After all, you can’t run while your body keeps shaking every second, can you?

To restore your body’s balance, sit down, and control your breathing. Take breaths as deep as you can, then slowly exhale.

If you're lucky, your hiccups might stop at this point. Nevertheless, your muscles might spasm again if you run right away.Therefore, I highly recommend carrying on with the rest of the steps.

With leg cramps, hamstrings can be easily stretched by reaching out for your toes with your hands.To do the same with the diaphragm, we need to briefly understand how breathing works.

Contrary to what most people think, lungs don’t participate that much to the actual breathing process. They’re just empty air sacs that discard CO2 and infuse oxygen into the blood.

External muscles do all the active work. Diaphragm comes on top of the list since it’s that largest breathing muscle.

The diaphragm is an inverted-U-shaped muscle located just below your lungs.

To prolong the duration for which you can exhale without breathing, you have to supply your body with the highest amount of oxygen.

Take a gradual deep breath until your lungs can’t expand any further. Then hold it for 5 seconds to give a chance for oxygen to enter your blood.

Right now, your diagram should be in its most contracted state. You shouldn’t hold your breath longer than 5 seconds to avoid causing more spasms.

Here’s the tricky part. Just like most of the muscles in your body, stretching the diaphragm must happen gradually. Therefore, you’ll have to exhale your breath in 3 nearly equal stages.

For the first stage, exhale some air to relieve part of the tension inside your lungs. Then, hold the remaining breath for 10 seconds.

Now exhale until your body returns to the neutral state. You should feel that your lungs and stomach are completely relaxed.

Again, hold that position for 10 seconds.

For the last stage, you should completely empty your lungs. To do that, you’ll have to contract your belly until the outline of your rips appears.

Since the stomach is located just below the diaphragm, this movement should push the diaphragm into its most stretched state.

Now hold this position for as long as you can. 10 seconds are good, but it’d be better if you can hold it longer.

By now, your body will likely be in deep need of oxygen. It’s crucial to fight the urge of breathing too fast, though. Otherwise, you might precipitate the spasms again.

Spasms greatly differ between people. They can even vary in severity between different situations. Ideally, hiccups should stop after the first breathing session. But you might find yourself in need of a second or even third round.

Why Do You Get Hiccups After Running?

As established, we’re certain that hiccups are a set of spasmodic contractions happening to the diaphragm. But unfortunately, scientists aren’t sure about the underlying cause of these spasms. However, there are some theories that try to explain this phenomenon.

Logically, if you don’t properly control your breathing while you’re running, you’ll increase the likelihood of spasms. Keeping your chest open and staying mindful about your breaths should resolve this problem.

If you’ve been experiencing this issue for a long time, your diaphragm might be too weak to handle all that work.

Technically speaking, this issue should resolve on its own as you keep training. But there are some diaphragm-centered exercises that can speed up the process.

The good news is, as your diaphragm gets stronger, you’ll be able to control your breathing much easier. You’re killing two birds with one stone!

I hope this method helps you stop hiccups after running. If it doesn’t, you can try some of the well-known home remedies.

Although they’re not based on scientific concepts, some of them actually work. Maybe they have an actual effect, or maybe it’s just a placebo that stops the hiccups psychologically.

Nevertheless, some of these methods can’t be done after intense running. So make sure you search well before taking things to action.