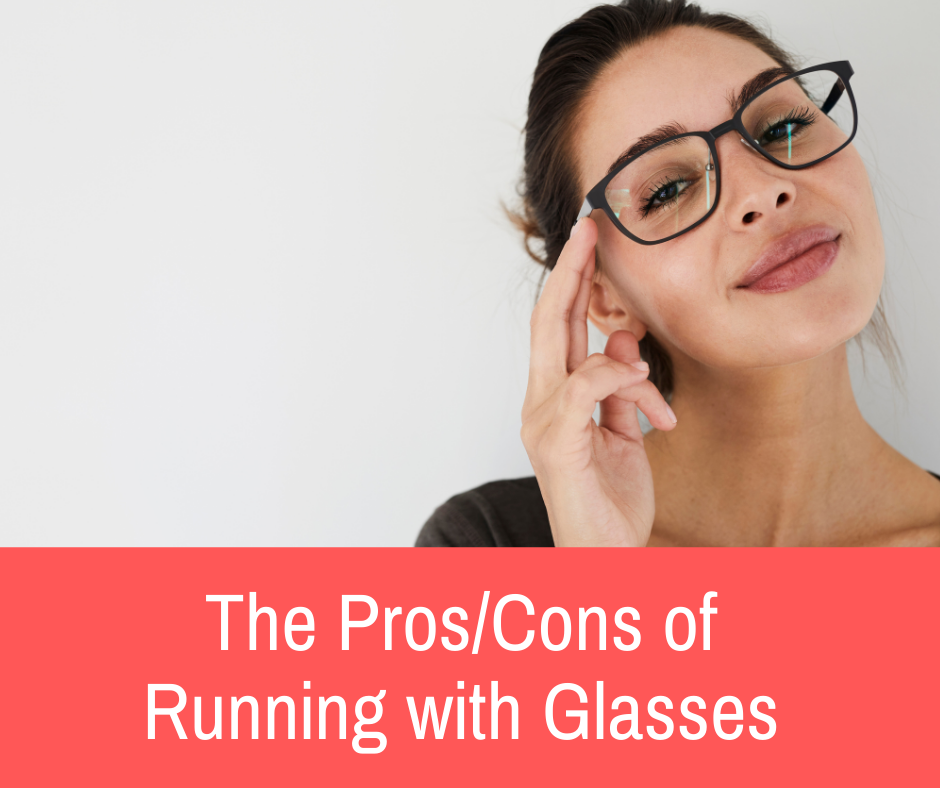 Wearing glasses while doing sports is challenging. Have you ever tried the upside-down Yoga poses with your glasses on?

Swimming? What about running?

There’s a number of issues bespectacled folks face if they want to stay active, and still see the world clearly.

Here are the pros/cons of running with glasses, and how to handle any issues that might come up.

The Pros of Running with Glasses

Besides being able to actually see the track, and looking super stylish, running with glasses has some noteworthy perks. Here are some of them.

Provide Protection From the Sun 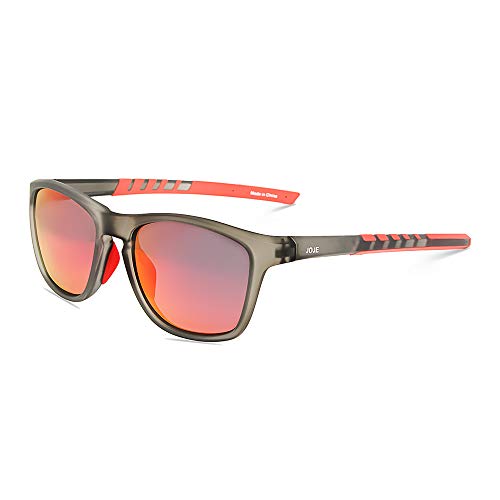 Prescription glasses can easily fit with add-on shades. This provides the best protection from the sun, plus the clarity of vision as you wear your specs.

Runners often train and compete during the day. That’s when the sun is glaring. Furthermore, they could be headed towards the sun. The harsh light isn’t just annoying, it could actually compromise the retinal tissue of the eyes.

Do you recall what sitting at the beach for half an hour does to your skin? The UV light from the sun does pretty much the same to the cells lining the eyes.

This damage is unfortunately irreparable, so we prefer to go with an ounce of prevention and put on the shades.

Glasses Are More Practical Than Contacts

Sports are most often sweaty, involve plenty of movement, and you’d get dirt all over your face. Except when you’re swimming, it’s all water. In all these situations, contacts would prove deficient and dysfunctional.

Running with the contacts on, usually ends up with dry inflamed eyes. The plot thickens if the runner decides to scratch those irritated eyes, then the contact falls off. Picking up the specs from the floor is a very different story from picking up contacts.

You can dust off your eyeglasses and put them on. Contacts will probably be lost. But even if you’d miraculously find them, can you put them back on? Nope. Please don’t even consider rinsing them with the mineral water.

Eyeglasses Are Cheaper Than Lasik

Lasik is advertised as the best thing after sliced toast, but remember that they’re both expensive and involve slicing!

Eyeglasses might be a hassle compared to the bliss of getting your eyesight back to factory settings. The journey to getting this outcome has some hassles of its own though.

The cost of the Lasik operation could be the biggest issue that keeps the glass-wearing folks attached to their specs. It costs around $2000-$3000 to get the vision of a single eye corrected. So on average, you’d pay about $5000.

This operation is considered an elective surgery, which means it’s treated as a fancy-schmancy unnecessary procedure. As such, most medical insurance companies wouldn’t cover its costs, and you’d need to pay for it out-of-pocket.

Besides that, operations are risky business. Being admitted to a hospital holds with it a list of at least 10 possible complications.

Eyeglasses, on the other hand, cost less than $25 for a good UV protected pair. Plus, wearing glasses holds no such reasons for worrying as entering the OR.

The Cons of Running with Glasses

To be absolutely fair, there are a few downsides to running with glasses.

Running in Rainy Weather Gets the Glasses all Wet

This is a lot like getting your car windshield wet, without the wipers. This could get your vision totally messed up within minutes.

The same effect happens if the weather is foggy, snowy, or even sandy. Even if you perspire profusely, the lenses could still get wet and messy.

To overcome this annoying scene, many runners wear a cap and wish that it would shield their glasses from the rain. Others resort to a very clever trick: they apply mild shampoo to their glasses. No water is needed. Then, they wipe the soap off to complete dryness.

This simple treatment makes the water drops slide off the lenses instead of clinging to them. As an alternative, you could spray your glasses with anti-fog spray.

This proactive measure is great when there’s a forecast and the rain is in its seasonal timing. This is not always the case though. Several times the skies would just open up and pour their hearts out.

Running at Night with Reflected Lights is Confusing

Here too we can refer to the car windshield. Preferably, a wet dirty one. Imagine yourself watching the lampposts, car headlights, and neon-signs through that glass. If you still can’t imagine this with sufficient clarity, think of an impressionist painting.

At night, several bespectacled folks see that the lights seem to get an extra tail and halo. If there are too many sources of light, things eventually get blurry.

Some eyeglasses get an anti-reflection coating, and it could improve this multiple spec scene. However, eliminating these dancing lights entirely might not be possible.

This is where having Lasik surgery or putting on contacts takes a real advantage over real eyeglasses.

Glasses could Move or Fall Off

The thump-thump of running translates into a significant force that disturbs your eyeglasses. If you’re jogging at a leisurely pace, and the day is particularly hot, the glasses could move a bit down your nose bridge.

Then again, if they don’t fit snugly, or you run vigorously, your glasses carry the serious risk of falling off.

This downside for wearing glasses while running isn’t the worst thing we can think of. That’s because there’s more than one remedy for it. And they don’t involve shelling thousands on a Lasik procedure or putting on the contacts.

Many runners tie their regular glasses around their heads with a rubber band. This provides sturdy support for the glasses, despite the high-intensity activities.

There’s also the ready-made option Unique Sports Eyeguard, where you can insert your prescription lenses in the frame. It has a soft nose piece made from silicone, in addition to padded temple handles.

Alternatively, you could get protective eyewear that you can put on top of your regular glasses.

The Crews Law Overglass Lens is comfortable, clean-cut, moderately priced, and on top of that, it provides UV protection. It’s also anti-fog if you were wondering. If you’re still worried that it could fall off, you can use some anti-slip straps.

You might be wearing prescription eyeglasses, or you’d just like to sport a pair of knockout shades while running. Both ways, it’s a totally legit need. But not totally simple.

Hopefully this run-down of the pros and cons of running with glasses clarified the situation. Now you know what you’re in for, and how to make the best of it. Enjoy your run!