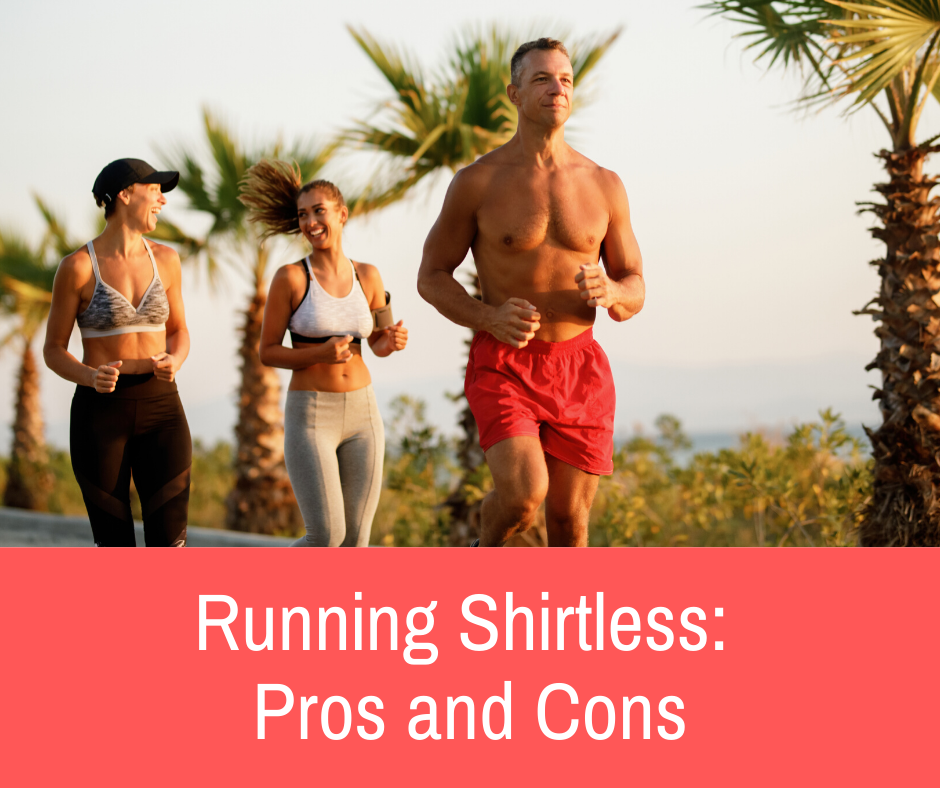 Running is undoubtedly the best exercise for almost everyone. It doesn’t require much equipment, it doesn’t bear major risks, and you can do it nearly everywhere. And if you were to take your shirt off, it would be a lot freer and more enjoyable.

The general public certainly won’t be pleased by gazing upon the sweaty flesh of every dude in town.

Let’s begin with the juicy perks, shall we? Those benefits are based on the experience of many runners around the world. Some of them might not apply to you, but some surely will.

I don’t know about you, but I definitely hate it when my shirt gets completely soaked in sweat. It weighs you down, it doesn’t look good, and it stinks like hell on the way back home.

If you live in a southern state, this should be the major benefit behind shirtless running. It opens a whole new potential.

Plus, the feeling of cool air on your bare skin is literally priceless. The faster you go, the better it’ll feel. Honestly, I can’t think of a better encouragement than this.

I’ll be honest. Somedays, I wish I could just surgically remove my nipples to solve this problem once and for all. If you have prominent nipples like me, you should know what I’m talking about.

Worst of all, it doesn’t get better with changing the shirt material. Be it cotton, polyester, nylon, you name it.

As long as you run for more than 10 minutes, the shirt will start rubbing on your nipples, causing an incredibly annoying sensation.

Fun fact, this condition is so common that it got its own name! With Jogger’s Nipples, athletes find it extremely difficult to carry on with their running routine after the whole chest area turns red and sore.

In that case, it becomes nearly mandatory to run shirtless. Using tapes might work, but not for everyone.

You’ll Get a Simultaneous Tan

When you run shirtless, you’ll be the first person to get that sick tan everyone craves. You won’t have to free time to go to the beach.

But if you live in an exceptionally hot area, this very benefit might be a drawback. Exposing your skin to UV rays can increase the likelihood of developing skin cancer.

This might sound cheesy, but catching girls peeking at your muscles as you’re striding feels so good. It can actually encourage you to go running even if you don’t feel like it.

But there’s an ugly side to this benefit. A major drawback, in fact. Keep reading to find out the details of this point

Now let’s see the ugly face of taking off your shirt. And again, these points might not be true for everyone.

It Opens the Door for Body Shaming

Let’s agree on a crucial matter. No one should be shamed for how they look. Even if you run shirtless, this doesn’t justify negative comments or toxic gazing.

Still, no matter how hard we try, some people will keep practicing this awful habit. Like it or not, taking off your shirt will invite those people to bother you.

If you don’t mind it, that’s perfect. But if criticism easily gets you down, you’ll be better off wearing a shirt.

And again, I’m not justifying body shaming. But if running shirtless would make you stop running altogether, it won’t be worth it.

Nothing to Wipe Sweat Off Your Eyes

I know that some people hate it, but wiping your sweat with your shirt is the most convenient way.

You could carry a small towel in your pocket, but I don’t like how bulky it feels. Plus, for really sweaty guys, a small towel won’t cut it, not by a long shot.

If you don’t have anything to wipe with, that’s certainly some bad news for your eyes. You might find yourself naturally inclined to wipe with your already-sweaty arm, which will make matters worse.

It’s true that it doesn’t present any harmful effect in the long run, but it’s still incredibly annoying.

Sometimes I just can’t endure how stinging it feels that I have to take a break. Surely, constantly disrupting your running routine would negatively impact your gains.

You Can’t Carry a Water Bottle

Without a shirt, it’ll be nearly impossible to wear a water holder. Since holders are commonly made of mesh, it’ll cause severe irritation and redness to your skin.

If you don’t have a bottle on you, that would leave you with public water fountains. I don’t know about you, but I never trust them.

I’d rather stay thirsty until I get back home than drink after god knows who!

Not Suitable for Everywhere

Like it or not, you can’t just take off your shirt and run in a place crammed with people. It’ll be so awkward if you bumped into someone with your super sweaty skin.

This fact might take away a lot of fun. You won’t enjoy running with your friend in your local park, you can’t always run in your neighborhood, and you can’t participate in running events.

I hope this article showed you the full picture of running shirtless. I can’t really recommend it or advise against it since this differs according to your situation

If you decided to do it, be sure to brace yourself against negative comments. Always remember that nobody remains in shape year-round, not even celebrities! Life doesn’t always leave a space for working out.

Keep in mind that working out takes effort to be consistent, and that’s what you should be proud of. And hey, if your body doesn’t look that good now, it’s only a matter of time before it does!