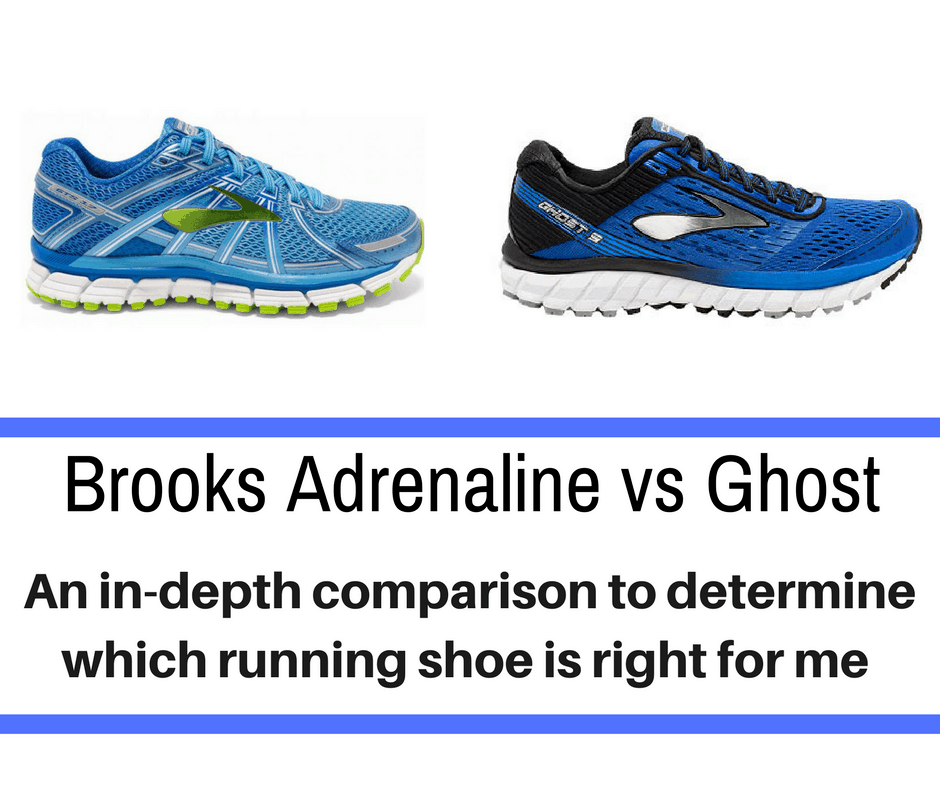 Brooks is at it again with yet another group of new adaptation releases. That’s right; even before we’ve had a chance to adequately sample the older versions, these guys are hard at work trying to release a dozen more styles.

That’s why we’ve devoted a couple of segments to browse through and compare the best that Brooks has to offer.

Below we break down the differences of these two very popular running shoes. Brooks Adrenaline Vs. Ghost - below is a quick comparison chart. More in-depth differences are included below.

If you were looking for a comparison between the Brooks Ravenna and Adrenaline, you can find it here. We also compare it to the Glycerin and you can find that complete comparison here.

In 2000, Brooks was on the verge of bankruptcy, having barely enough to make payroll, when their Board of Directors tabbed Jim Weber as CEO.

Weber, as Alexia Brue shares, made a bold choice, “we made a decision that no other brand has made: We decided we’re just going to be a running brand in 2001”.

Making a decisive decision like that forced Weber and his employees to double-down on their efforts and focus on a specific target market, but that choice did not come without consequences. Weber adds "we were at about $65-70 million in revenue and we got rid of almost $30 million of it!

At that time, it was viewed as an unorthodox decision that has since resulted in tremendous growth for the company.

Where are they now?

Today, Brooks continually releases new models by the day without fail. And all of them excellent pieces of footwear that actually do what they were built to do.

So whether you’re out on the running track, hiking trails, or just indoors working the treadmill, you can be sure that good ol’ Brooks has a shoe for that.

However, Brooks is starting to experience the most common drawback that comes with too much variety.

Because the more their catalog starts to pile up, the more difficult it is for runners and athletes to grasp the purpose of each shoe.

That’s why I’ve been comparing and contrasting a few of Brooks best sellers to help you guys out.

Today, we’ll be checking out two of the best shoes from the Adrenaline and Ghost series, specifically their newer versions.

Looking at both these models, it’s as clear as day that they fall in two different running categories.

Allow me to explain; whereas the Brooks Ghost 12 is built like a neutral cushioning running shoe, the Adrenaline GTS  is playing a whole different ballgame.

See, we all know that the Adrenaline line is famous for its stability style.

That said, you can be sure the GTS is a stability running shoe that is perfect for overpronators.

Being the well-cushioned neutral trainer that it is, the Ghost delivers an overall softer ride with a solid touch of stability.

This is the ideal shoe for neutral runners since it keeps on propelling you forward.

The Brooks Ghost is definitely a high mileage trainer that is generously cushioned for those longer runs.

With the Brooks Adrenaline GTS, you can feel the shift in stability straight off the bat.

This is one shoe that impresses all by being a step above the rest in terms of insane stability.

In addition to tons of stability, this go-to trainer still keeps its end of the bargain by offering a smooth ride all the way. 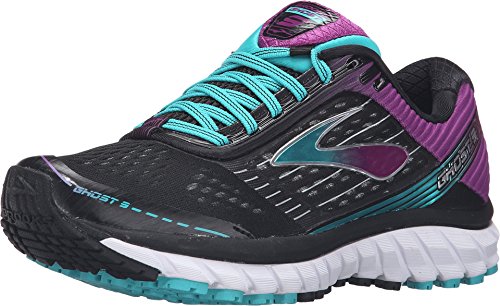 The Ghost series managed to make it to almost every list for shoe of the year.

So you can imagine the mass excitement when the newest version hit the market. The Ghost has really gone through some significant changes.

Most of these changes are definitely noticeable and impressive. As for others, Brooks could have done a whole lot better.

Brooks has tons of Go-To shoes in its lengthy line-up.

But if you consider yourself a neutral runner, then you must be loyal to the Ghost series without a fault.

That’s because when it comes to the cushion neutral set, Ghost is hands down top of the line merchandise.

This particular adaptation has been entirely updated from the ground up.

The Ghost is one of the most popular running shoes in the line, it ranks up their with the Adrenaline, Ravenna and Glycerin. Some say, it's the best of the Brooks line. 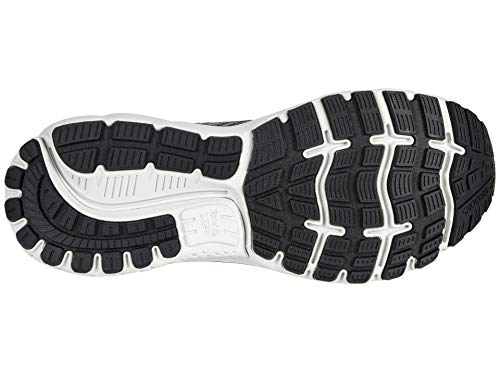 As an avid user of the Ghost 9, this shoe provides the cushion needed while being a very comfortable and light shoe.

In fact, I ran my fastest 5K in these shoes. I included as a con that the front part of the shoe (the uppers) tend to let too much water in when running in the rain. 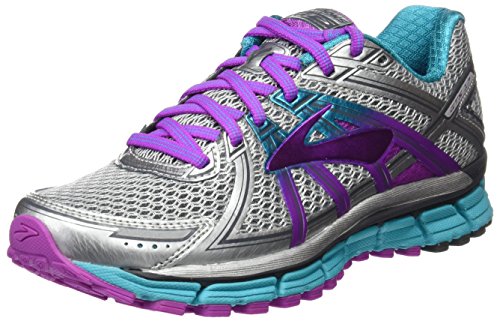 Brooks is back again with their infamous Adrenaline GTS series.

This series has always been one of my all-time favorite Go-To Shoes since it always comes with Brooks running flagship stability features.

With the newest GTS, you’ll notice a slight decrease in weight as well as significantly updated technology as compared to last year’s model.

Still, Brooks remains true to its original foundation. The GTS is definitely a solid piece of footwear for runners looking to overcome pronation.

Many runners who choose Ghost or Adrenaline are brand and model loyal.

Which means, that when it's time to buy a new pair of shoes runners will select the same exact or the next iteration of that shoe.

Taking a closer look at the uppers, both the Ghost and Adrenaline GTS  are exceptionally similar in that they all make use of no-sew overlays.

These are always more comfortable and flexible than the stitched on overlays.

However, the color schemes on these shoes make them seem like they come from two different worlds.

The Adrenaline  makes quite the first impression with its exciting uppers. Sure, the electric blue and yellow colorway may have been a tad standard for Brooks, but I just love the way the shades are especially crisp and pop out on this shoe.

The Ghost seems to want to go in line with its name because of the dull, blue exteriors. Still, the blue shades do get a bit electric towards the front.

As explained above, the Ghost  has been entirely updated from the ground up. However, the most significant update has to be the uppers.

In this case, Brooks running went ahead and used a whole new engineered mesh and went fully seamless to give you excellent breathability all through.

However, this superior breathability can also be the 9’s greatest weakness. That’s because if it rains, you can expect both the shoe and your feet to get a thorough soaking.

The Ghost updated uppers hug your feet in all the right places without exerting too much pressure. Another change that users are definitely going to feel is the much broader toe box in this adaptation.

High mileage runners will really appreciate the wider toe box since it allows their toes room to stretch and spread out.

Lastly, Brooks running incorporated an extra eyelet that ensures the tongue stays put no matter how you twist your feet. 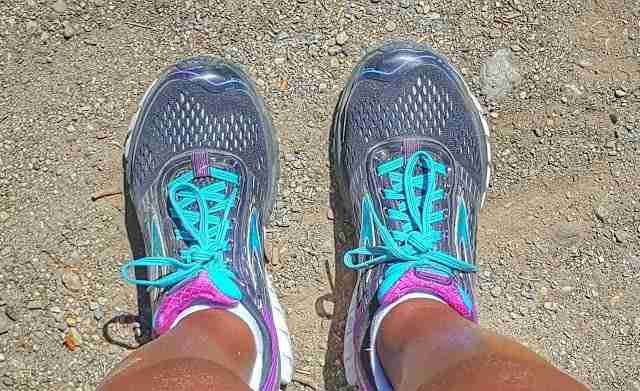 Much like the Ghost, the GTS also boasts of seamless mesh uppers that are not only comfortable, but also have the same breathability.

However, it comes with stitches at the front and back as well as some reflective accents that allow wearers to be seen even at night.

And while the toe box may not be as wide as the Ghost, I didn’t notice any narrowness issues.

What really stood out for me with the Adrenaline has to be the plastic heel. Brooks incorporated a hard plastic over the heel area to keep your foot comfortably and securely locked in.

The GTS also comes with a second eyelet on the upper portion of the tongue to keep your feet secured no matter how you twist while in motion. 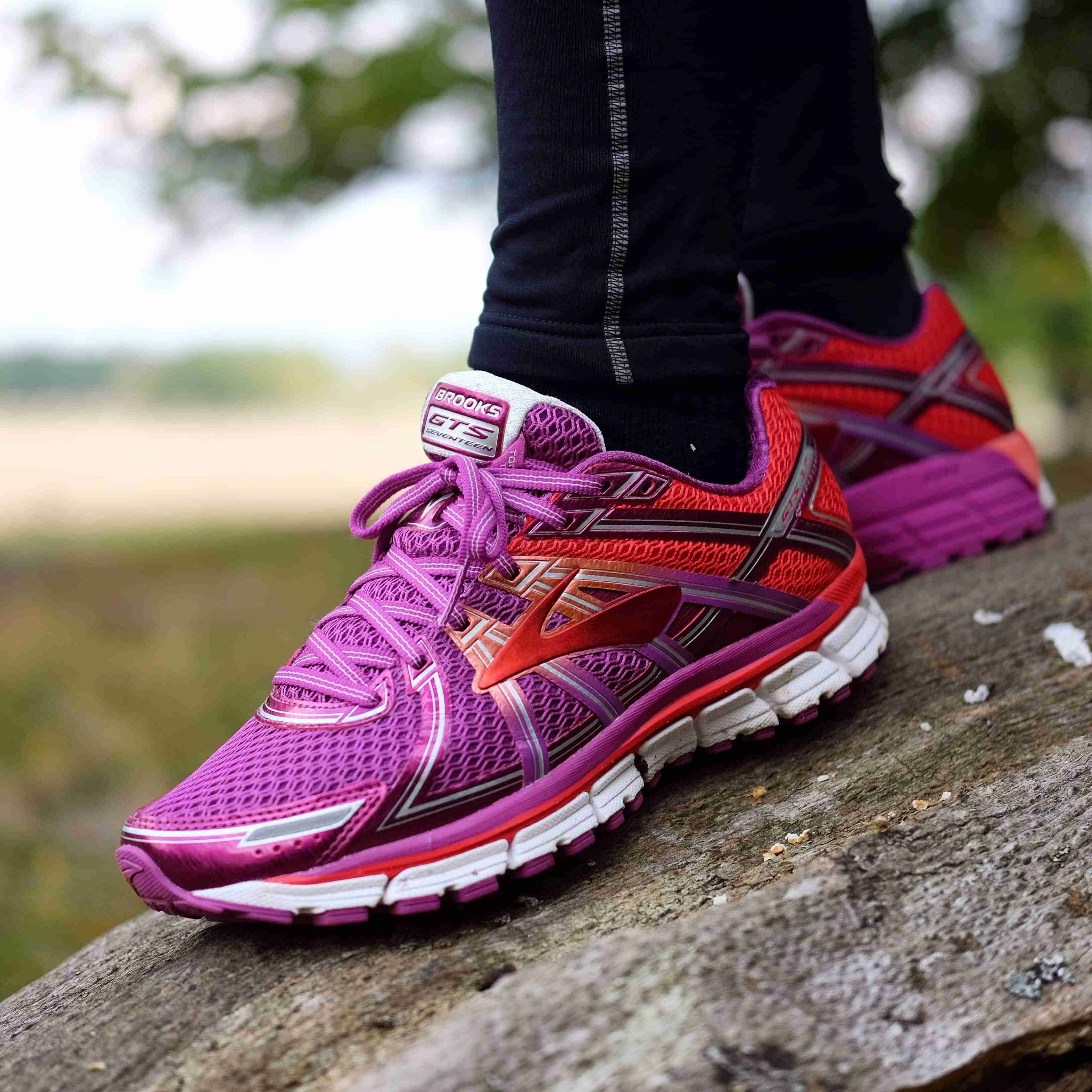 While the Ghost has been updated top to bottom, I felt that the sole unit got the least amount of updating.

The cushioning still remains largely the same as the earlier versions with the most prominent difference being a heel drop from 35mm to 30mm. This lower heel stack has the effect of making the Ghost feel much more grounded and stable.

For the midsole, Brooks used their signature BioMoGo DNA foam to cushion every step you make.

For the newbies here, this type of foam is the first ever cushioning tech that dynamically adapts with each foot stride you make.

So in addition to adapting to your stride, the foam also displaces pressure evenly to your underfoot.

For the outsole, the Ghost toned down on the grip making it less aggressive than in the some of the early adaptations.

Honestly, this is a very welcome change seeing that the grip on the Ghost 8 was outright ridiculous.

Other updates on the Ghost includes a full-length crash pad that helps keep your stride consistent, especially on longer runs. 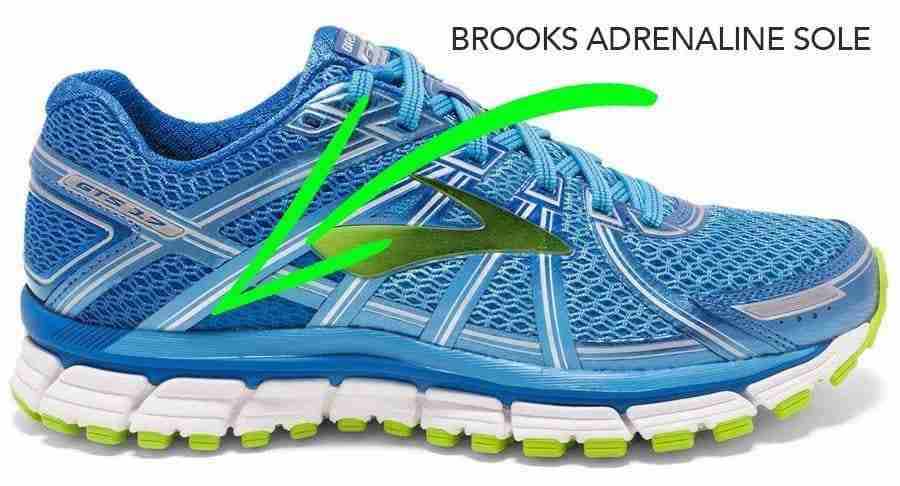 The Adrenaline GTS series from Brooks always delivers quite a kick with its innovative sole unit.

The midsole is also made up of the same BioMoGo DNA mid sole that adds a custom touch by adapting to the wearer’s feet and style of running.

And as an added touch, this foam is biodegradable to make sure that we’re all playing our part in saving the planet.

Another feature that really stands out with the GTS has to be the separation of the sole unit with emphasis on hot spots.

The finishing touch comes in the form of a hardened plastic in the innermost section that is designed to correct missteps and offer a more natural ride. 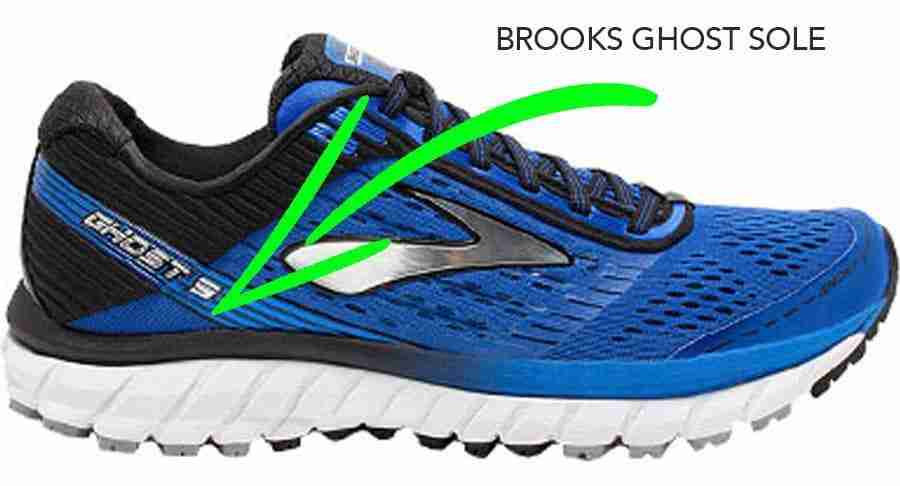 From all the information above, it’s now clear as day which shoe is engineered to do what.

Even just looking at both these models you can tell that they fall in two different running categories.

While the Brooks Ghost with the support of BioMoGo DNA foam, it is built like a neutral cushioning running shoe, the GTS is playing a whole different ballgame.

You can be sure the GTS is a stability running shoe that is perfect for overpronators.

Being the well-cushioned neutral trainer that it is, the Ghost 9 delivers an overall softer ride with a solid touch of stability.

This is the ideal shoe for neutral runners since it keeps on propelling you forward.

The Brooks Ghost is definitely a high mileage trainer that is generously cushioned for those longer runs.

With the Adrenaline, you can feel the shift in stability straight off the bat. This is one shoe that impresses all by being a step above the rest in terms of insane stability.

In addition to tons of stability, this go-to trainer still keeps its end of the bargain by offering a smooth ride all the way.