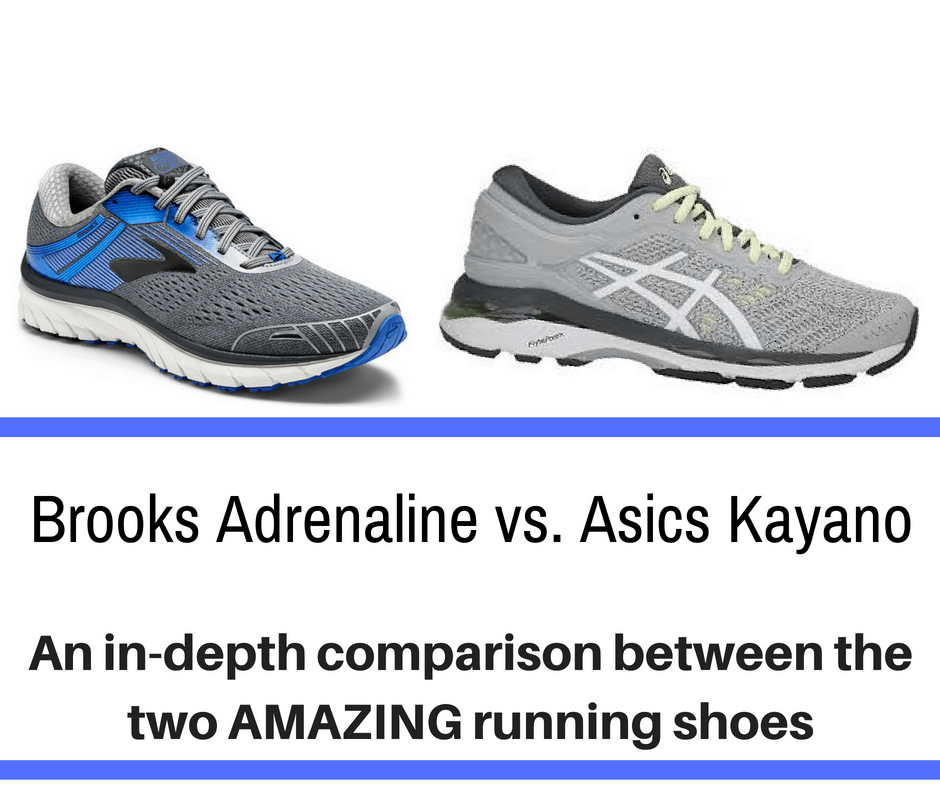 It’s time to do a review to make sure runners receive the best footwear possible to remain happy, healthy, and active without sacrificing too much money or comfort.

On today’s list are the Brooks Adrenaline and ASICS Kayano, two popular models that continue to be seen on streets and trails alike.

When determining which shoe is better and honestly whether either one is a good option, it’s important to know what makes a shoe comfortable, wearable, and good for the body.

A full detailed analysis of Brooks Adrenaline vs Asics Kayano is below but for a quick comparison here are the main differences.

Asics and Brooks have a long-standing debate amongst running circles. which one is better. In this article, we break down the differences. If you are curious about what the major differences are between Brooks and Asics, check out this article.

The companies in this review are actually some of the oldest creators of athletic shoes. Brooks Sport, Inc. opened in 1914 as Brooks Shoe Manufacturing Co., Inc., according to the company website.

They sold footwear designed for gymnasiums and actually invented the rubber stops on roller skates.

ASICS is a Japanese sportswear company that opened in 1949 and first started making gymnasium shoes as well.

It, like Brooks, is now one of the top manufacturers of athletic footwear and continues to innovate as more information becomes available on what makes running shoes good.

Before we provide a complete review, I'd like to provide the starting point of evaluation.

What Makes A Quality Running Shoe:

There are a lot of resources online which claim to know what makes a running shoe the best for an athlete, but the best guidelines come from the American College of Sports Medicine (ACSM).

This organization specializes in all things related to physical health and sports and thus created a few simple rules which people should follow when choosing footwear.

When picking a shoe, people should look at weight, slope, and whether additional features are included are not.

Weight refers to the physical weight of each shoe.

The ACSM recommends that female footwear should weigh no more than 8 oz. while male examples should be roughly 10 oz.

This is important because shoes which are too heavy can put excess pressure on a runner’s joints and muscles, making it difficult to exercise and the person more likely to injure themselves.

Slope is the angle of the bottom of the shoe. Most high schoolers learn about a geometric slope, which is the rise/run of a line.

For an athletic shoe this term focuses on the height difference between the heel and sole of a running shoe.

According to the ACSM, the best shoes will have almost no slope because the angle can cause injuries or exacerbate previous conditions, making it difficult to exercise safely.

Finally, the ACSM recommends that the best running shoes will be ones without a ton of extraneous features like cushioning, padding, or decoration. There are a couple of different reasons for this rule.

First, too much padding can change the natural posture of the foot, which can put extra pressure on the joints.

Second, too much decoration will get in the way of the runner, potentially reducing speed and increasing the risk of injury.

So, the best running shoes will be ones that are lightweight, have almost no slope, and a minimalistic design.

With that being said, on to the actual reviews...

The Brooks Adrenaline is also referred to in its name as the GTS, which stands for the “go-to shoe” for all of the runs you may need. It is a versatile support shoe designed for overpronators who need extra arch support.

They come in a broad range of colors and styles but focus on providing a simplistic fit that works well for flatter road running.

The shoe does not come with any extra frills, as Brooks’ focus with the Arednaline is to provide a functional and reliable supportive daily trainer over all else.

The typical slope, or heel-to-toe drop, on the bottom of the shoes is now 12 mm in the newest models, which will give your ankle and feet much more support if you need it.

The interior arch support tends to work for people who have flat or average arches, while other individuals might need to seek a shoe with even more support.

The Adrenaline has an average fit, but some people might find the design too narrow, especially around the toe box.

There is extra padding with Brooks’ DNA Loft midsole foam on the bottom of the shoes to improve comfort without causing the wearer’s ankles to roll.

The sizing is mostly what people would expect, though many recommend that the buyer go around a half size larger than usual since the Adrenaline can run small rather than large.

Brooks is good about the refund process, it is simple and exchanges are possible.

The Adrenaline was designed with a breathable 3D Fit Print and Engineered upper mesh that allows air to cool the feet while still maintaining a solid lockdown.

The shoes are not waterproof. If you are looking for variations of colors, Brooks has a ton of different styles in the latest iteration of Adrenaline.

The Adrenaline is comparable to the Ghost and Ravenna but because it has such a greater amount of support, it tends to be the first choice for newer runners, especially those who have flat feet. 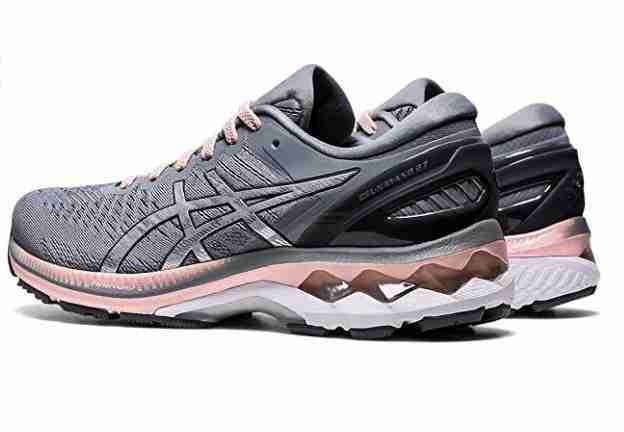 Asics Kayano has over a dozen different models in this line, but they do have some common features which contribute to whether they are comfortable or not.

First and foremost, a single shoe in this line tends to weigh around 9 oz. for women and 11 oz. for men, and they have really only gotten heavier over time.

Unlike a lot of running shoes, the Kayanos have a different slope for men and women’s variants.

This does offer more support to the achilles, ankle, and feet, but just be careful to stretch out these areas to maintain proper mobility.

However, the shoe itself is padded and uses flexible, breathable material for a cool fit by implementing an EVA sockliner and its Engineered upper mesh.

There is a mid-unit on the bottom of the shoe designed to absorb shock, which most reviewers enjoy. The shoe is also equipped with a large amount of GEL Technology to make the supportive ride a plush feel as well.

The Kayanos were also designed for heavy-duty running and work well both for daily joggers and marathon runners. They are built to be beefy and have a strong High Abrasion Rubber (AHAR) to further the durability.

The shoes also come in many different colors and styles, making it easy to find something that works for anyone.

A few people reported that the mid-unit could be uncomfortable. There is arch support for average and high arches, but not for flat feet.

This shoe was made specifically to support those who overpronate, so you should probably stay away from the Kayano if you have a neutral gait cycle.

The Brooks Adrenaline and ASICS Kayano are both made to be supportive and soft shoes with the intention to prevent overpronating in the athletes who wear them. They offer many of the same assets in terms of support, comfort and durability.

The Kayanos do have some possible red flags, such as the high weight and slope, but they seem to work well for people who need the extra support and want something which won’t fall apart in a few months.

The Brooks Adrenaline will probably work better for a greater portion of runners because it offers a versatile design that works for a multitude of running occasions from easy/daily training to long runs and even marathons.

So, which is better? In general, the Brooks Adrenaline shoes better follow the guidelines created by the ACSM, but it will ultimately come down to a runner’s preferences.

Someone who is interested in lightweight footwear meant for street running would have better luck with the Adrenaline line, but someone who need some extra support in their gait cycle may benefit more from the Kayano, as it offers some more intense arch support and has a higher slope.

Remember to wear something comfortable and know what arch style supports your feet the best. It is often best to try shoes on and do a small jog in them before buying so you have a better idea of what works for you.

This way, you can always make sure you have the best running shoes available.

Brief History of the Running Shoe:

In case you were curious....

People didn’t always know what was best for their feet. In ancient times, it wasn’t uncommon for messengers and runners in places like South America to sprint in leather sandals designed to protect the soles of their feet but leaving their toes exposed.

Most shoes didn’t even have a lot of support, as leather was expensive and peasants typically wore wooden footwear.

The LA Research Project notes that what most people would consider a running shoe didn’t actually emerge until roughly 200 years ago, when people during the 18th century tried to make full leather shoes for exercise.

Unfortunately, these stretched when wet and didn’t offer much comfort since they were hot and not breathable.

Eventually, people started to combine rubber soles with leather to create a surface that would stick to the ground and not slip.

After a few more decades, around 1852, manufacturers began to sell special running shoes with spikes on the bottom to help athletes grip the ground.

The next major development was vulcanized rubber, which is the process of combining rubber and fabric. The creator used this to make soles with treads and the company eventually realized they could market the resulting footwear as athletic shoes in 1917.

After a few more decades, a different inventor realized that shoes needed to have different treads based on whether the athlete would be sprinting or running long distances. 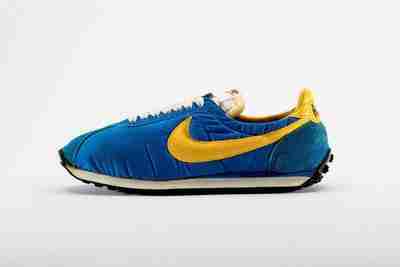