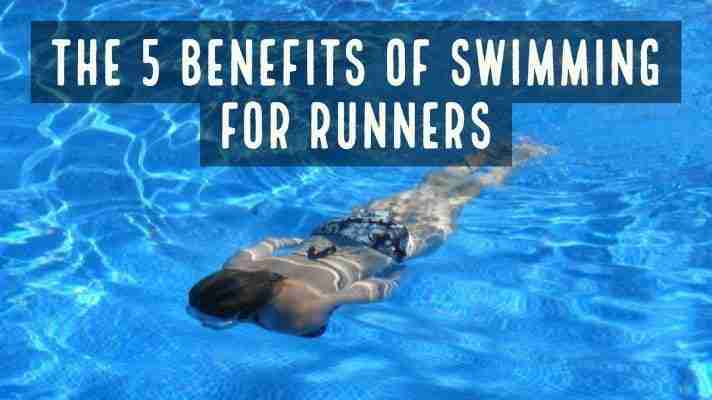 â€‹Many runners know that their chose hobby is great for working out leg muscles but can often leave other parts of the body neglected. Recently, professionals started to encourage dedicated runners to incorporate other forms of exercise into their routines, including swimming.

Not just for the fish, swimming can provide many benefits to runners for a variety of reasons. But how is swimming any different from running? Arenâ€™t they both just methods for getting from one location to another?

The Differences between Running and Swimming

Scientists, athletes, and people interested in physical health have compared running and swimming for decades. The U.S. National Library of Medicine and the National Institutes of Health determined that the main differences between the two activities are the level of impact on a humanâ€™s joints and the calories burned during each activity.â€‹

A study reviewed by the New York Times sums up the contrasts best by noting that a runner can travel over three times the distance of a swimmer in any given time period, but even the most inefficient swimmer will burn 25% more calories.â€‹ This difference is caused by the muscles used in each activity as well as the natural resistance placed on the athlete.

Humans are land mammals. Although we can swim, a humanâ€™s body is better suited to walking upright and moving through the lower resistance of the natural atmosphere. When placed in water, humans do not normally have any body parts like webbed hands and feet to make it easier to move.

The density of water is over 100 times greater than that of air, meaning you need to expend more energy just to travel. The best way to imagine the extra effort is to think of walking through the wind or a giant square of Jello. You are facing increased resistance that makes it difficult to move your limbs; water has the same effect.

With these differences, how can swimming help a runner? Below are the top 5 benefits to incorporating swimming into any runnerâ€™s athletic regimen.

The 5 Benefits of Swimming for Runners 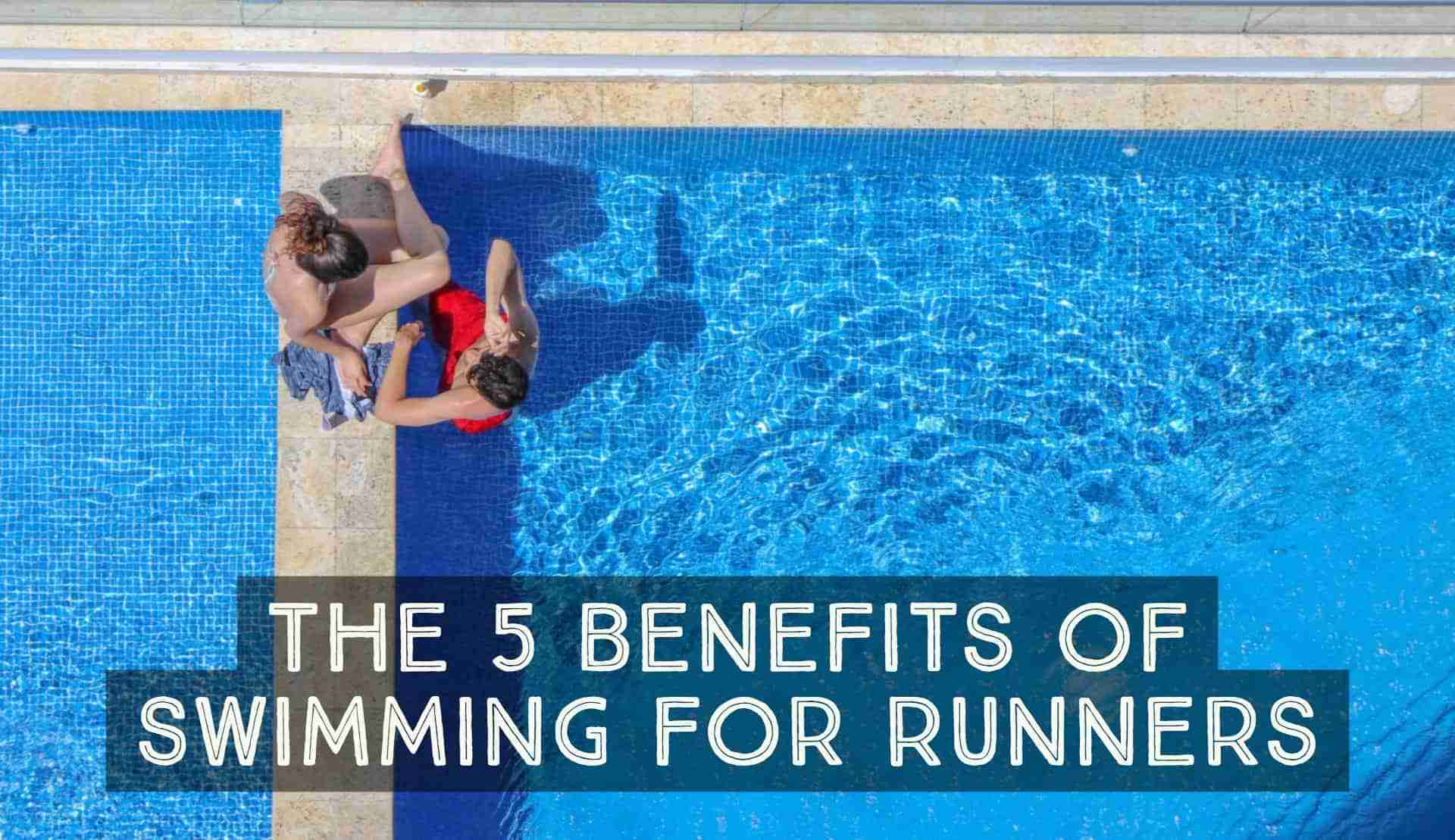 Improper breathing is a major problem in all types of athletics. Runners especially can face problems such as breathing too shallowly, breathing too deeply, or even just inhaling and exhaling erratically.

In many cases, runners can get away with poor breath control because their environment does not influence their breathing.

However, when somebody swims, their ability to breathe is entirely controlled by the surrounding environment. Itâ€™s a simple fact that no human, at least one that lacks gills, can breathe underwater. Swimmers therefore have to learn to regulate their breathing to better accommodate the environment.

Runners who swim as part of their exercise routine can learn how to breath more evenly, how to expend less energy while inhaling and exhaling, and when to breathe through the mouth and when to do so through the nose.

Swimming features additional benefits related to the cardiovascular and respiratory systems. Being able to breathe only at certain times strengthens the associated muscles, and runners have found the power of their lungs increases after incorporating swimming sessions into their athletic activities.

Running is a great way to tone muscles, and can even build some of them. The main muscles used by runners include those in the hips, thighs, calves, back, and shoulders.

When someone only uses running as their primary form of exercise, they are failing to work out other crucial muscles. Swimming can help fill in some of the athletic gaps associated with running.

Unlike running or cycling, swimming is considered a full body sport. Athletes need to use almost every muscle in their body to move through the water, including neglected ones in the arms, stomach, and sections of the leg like the glutes.

Working these extra muscles improves the overall physique of the runner, strengthens the extremities, and can help people avoid common injuries such as hip tendonitis and pulled muscles.

People also discovered that many forms of swimming actually lengthen muscles, which increases overall flexibility. This extra flexibility goes a long way to helping runners avoid the soreness and injuries which frequently occur after a run.

This video nicely explains some of the benefits of muscle mass gained from swimming. Unlike lifting weights, swimming develops lean, tight muscle that doesnâ€™t add extra bulk to a runnerâ€™s physique.

Muscle flexibility through elongation was just mentioned, but itâ€™s not the only part of the body that becomes more flexible after swimming. An important aspect of running is joint flexibility.

Most athletes who focus solely on running actually have much lower joint flexibility than other athletes because of the repetitive motions associated with running.

Joint flexibility refers to how much an elbow, ankle, knee, and shoulder can bend or stretch. The muscles associated with the joint, called the flexors and extensors, determine how much a person is able to move and how easy motion is.

Unfortunately for runners, their favorite activity is extremely inflexible. Unlike soccer players, swimmers, and tennis stars, runners repeat the same motions during the entirety of their active time.

Running does not require an individual to change up their style or make snap decisions to move a different way.

Too much repetitive motion builds the same muscles over time, but allows others to weaken. With weaker muscles comes the inability to move a joint as much as possible. This is what it means to have low flexibility.

Swimming elongates muscles, as mentioned earlier, which leads to greater joint flexibility. Runners with higher flexibility are less likely to suffer from common ailments such as sore calves, shin splints, and tendonitis.

Some individuals also discovered that their overall running performance improved because they had a wider range of joint motion after swimming.

Running is considered a high-impact exercise. High impact exercises are activities which put the body under a fair or high amount of strain, or which involve more direct forces against the body. Besides running, other examples of these activities include kickboxing, jump roping, and energetic forms of dancing.

Itâ€™s important to clear the air now: high impact does not mean bad for you. In fact, high impact exercises can strengthen muscles, burn calories, and improve joint health. Too much of it, though, overworks muscles and makes injuries more likely.

Sources like Runnerâ€™s World estimated that the amount of impact generated by running can be as high as 2.5 times a personâ€™s body weight!

Because running causes so much stress on the body, itâ€™s important for athletes to vary their exercises and reduce muscle strain. Swimming is an excellent exercise to add to a running regimen because it is considered no to low impact.

Swimming does not add a lot of extra force to be applied to joints and muscles because there is no hard â€œimpact,â€ which is something you would get when your foot hits a solid surface. Water isnâ€™t solid, and the main pressure comes from fighting the liquid to move forward.

This lack of an impact is one of the many reasons why swimming or water aerobics is recommended for people recovering from injuries, the elderly, or people who are overweight.

â€‹Finally, swimming is great for runners because it increases endurance. Similar to one of the earlier benefits, itâ€™s important to note that running only works out some muscles while swimming can target many different ones. Because swimming forces an athlete to use their entire body to move forward, itâ€™s an excellent way to increase overall endurance.

Your muscles truly receive a workout when battling the resistance in the water. Many runners find themselves able to run for longer periods after time after swimming regularly because they are used to facing more pressure and have developed the muscles they need to keep going.

Swimming also improves breathe control and breathing capacity, which can help individuals run longer. Your body becomes used to working out harder to cover a distance, and leaving the water leaves behind resistance while you maintain your new strength.

So, can swimming help you become a more efficient runner? The answer is yes, and not just for obvious reasons.

Because running is such a repetitive exercise, itâ€™s important for runners to branch out to other physical activities to develop neglected muscles and learn better breath control. Swimming is an excellent sport for many people to participate in because it helps build strength and endurance, uses almost every muscle in the body, and does not put the body under excessive strain.

If youâ€™re ready to jump in the pool and swim like a fish, itâ€™s important to remember to start with the basics and build from there. Just like with running, donâ€™t overexert yourself and allow your body to gradually become more comfortable with the new activity.