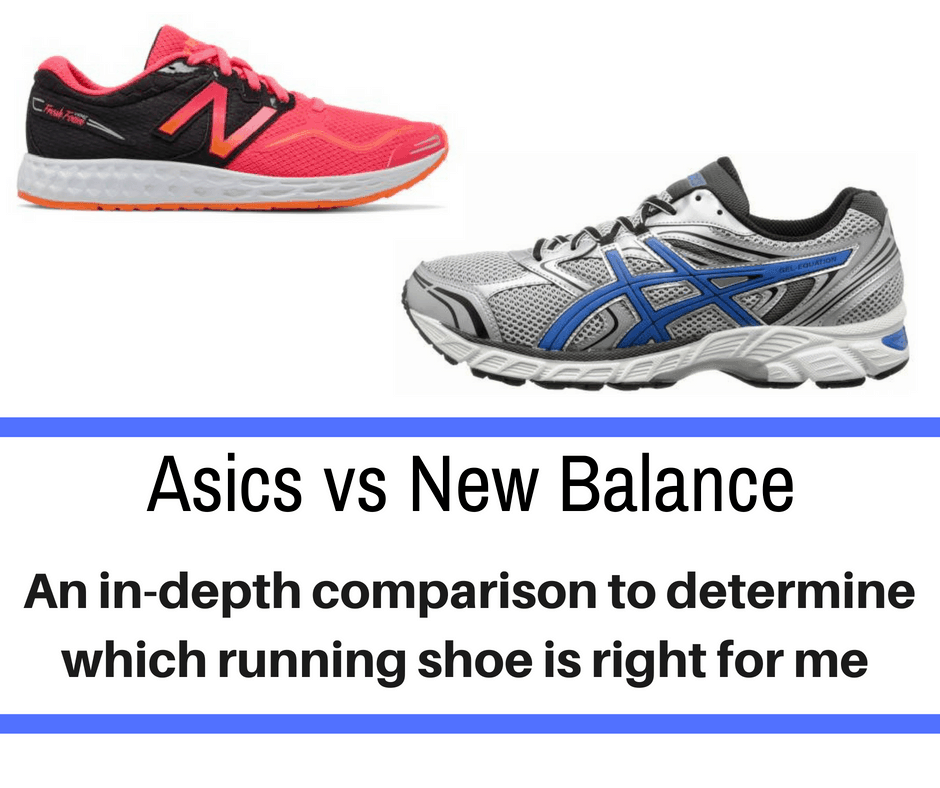 Asics & New Balance are two very popular running shoes. There are several distinct difference which making the decision between the two could be tough.

At quick glance, here are the main differences:

Asics' FlyteFoam Lyte Technology provides support midsole and under your heel with the AHAR outsole. New Balance has tremendous support under the arch, which is perfect for runners with plantar fasciitis. Despite New Balance offering lighter shoes, Asics are designed for durability as they tend to last 100-200 miles longer than New Balance.

What to Look for in a Running Shoe

Everyone might have a different opinion on what makes a pair of running shoes great, but there are a few consistencies between sources. The American College of Sports Medicine provides some of the most critical determining factors people should consider when purchasing a shoe:

Similar sources like WebMD mention similar characteristics.But what do these mean?

Surface angle or slope refers to the way the soles of a shoe contort a runner’s foot. A shoe with a large slope is one that has a larger degree. The best way to think of this is to remember your high school math classes.

Everyone knows that a right angle is 90 degrees and forms two sides of a perfect square. An angle of 120 degrees would be larger, while one of 55 degrees is smaller.

The term “slope” is colloquially used when one part of an object is higher or lower than another. A hill is a slope because of the ground’s height, etc.

On shoes, this slope is changed by the amount of padding on the bottom. A pair of running shoes with a high slope or surface angle forces the feet to become angled as well and can create more pressure for the runner’s joint. A shoe with a small slope has almost no angle and does not change the way a person’s foot sits.

The American College of Sports Medicine (ACSM) recommends a small surface angle or slope because it causes less stress on the joints and muscles. This decreases tension and lowers the risk of injuries.

The number of features included in a shoe simply refers to how many add-ons were put in the footwear. These could be padding, modulation, inserts, extra zippers, and other objects which change how a runner’s foot sits.

Too many of these increase the risk of injury, which is why many running shoes tend to be minimalistic.

Finally, the ACSM and WebMD caution against using shoes that weigh too much. The average running shoe should be 10 oz. or less (unless you have large feet). Extra weight gain increases the strain on a person’s joints and muscles, making it easy for an individual to injure themselves.

This video is quite long but manages to sum up many of the major factors involved in finding the right running shoe for you.

We have discussed the differences between Brooks & Asics & Asics vs Saucony previously, and now it is time to compare Asics vs New Balance, two very popular shoe brands for runners.

Asics is a Japanese company founded in 1949. It produces hundreds of different models of shoes which use a diverse array of technologies, including different forms of modulation and padding. As of 2018, Asics describes its shoes as running footwear designed to contour to a person’s feet.

These shoes emphasize flexibility and comfort. They are made for long-distance running and are typically tighter around feet than other brands.

Many Asics models include rearfoot and forefoot gel inserts to cushion impacts, and the company doesn’t include a lot of additional equipment.

So, how do Asics rate when compared to the three rules laid out by the American College of Sports Medicine?

In terms of surface angle and slope, Asics have a small angle because they pad both the heel and the toe. Many of their dedicated running shoes additionally feature minimalistic designs so the soles of the food are closer to the ground.

Asics does feature numerous additional features, and there are shoes that can suit almost every foot, including those with pronation.

However, many of their running shoes again focus on minimalism to help people focus on the feeling of their feet and attain higher speeds.

Finally, there is the weight. As sports shoes, Asics keep their models light and avoids adding too many extra frills that can slow runners down.

New Balance opened in 1906 and primarily sold arch supports until 1960 when they released the “Trackster.” The “Trackster” was the first running shoe to feature a rippled sole for better grip. The company launched its career after this initial innovation and continues to sell shoes dedicated to athletics.

New Balance shoes have been used for many years in the Olympics and are a popular choice for amateur and professional runners. The company sells several dozen different models and specializes in running and soccer footwear.

Their most popular model for runners is the Fresh Foam.

Overall, their shoes are looser than some other brands and primarily use foam for padding instead of gel.

New Balance does not incorporate a lot of extra features into their footwear and instead focus on making minimalistic designs. This means they additionally have small slopes.

In terms of weight, New Balances tend to be slightly heavier than the standard 10 oz. because the brand runs large. Some people have found they have better luck getting half a size smaller than usual.

How Do They Compare Against Each Other?

At first glance, Asics and New Balance seem similar. Both brands kept up to date with new developments in the athletic footwear industry and continue to innovate while staying true to their original designs.

Some of the differences between the brands can be seen in the following:

First, there is the toe box. This is the part of the shoe that surrounds the toes and is frequently the region which gives runners the most trouble.

New Balance tends to produce shoes with wider toe boxes because the shoe sizes tend to run larger than those of other brands.

Meanwhile, Asics frequently features tight or narrow toe boxes. Depending on the shape of your foot, this can either be a dream or a nightmare. Remember to try on any show before making a final decision.

Second, there is the slope. As mentioned earlier, this refers to the way a runner’s foot is angled based on the amount of support provided at the heel and toe of a shoe.

Both Asics and New Balance offer shoe types that have almost no slope and are as close to running barefoot as a person can be.

However, New Balance managed to edge a win against Asics by featuring minimalist models with barely any padding along the bottom.

Third, there are some differences between the two brands when it comes to cushioning. Asics models tend to use gel for padding while New Balance uses foam.

This decision does not make one brand better than the other, but it does change the sensation for you, the runner.

Due to this difference, you might need to try on several pairs of shoes before deciding which ones you like.

Finally, there is pavement efficiency. This isn’t a statistic published on the manufacturers’ websites, but rather something gleaned from the experiences of other runners.

Due to their different constructions, many people discovered that Asics tend to last longer on hard surfaces compared to New Balance, but New Balance tends to be more comfortable overall.

One maxim holds true during the purchase of any shoe: Buy what is comfortable for you to wear. There’s no point in spending money on something that hurts your foot or puts you at risk of injury because it contorts your ankles and the bottom of your feet.

Depending on your lifestyle and needs, Asics and New Balance can both be beneficial shoes for you. Remember to pick something that meets your desires, and keep blazing those trails.