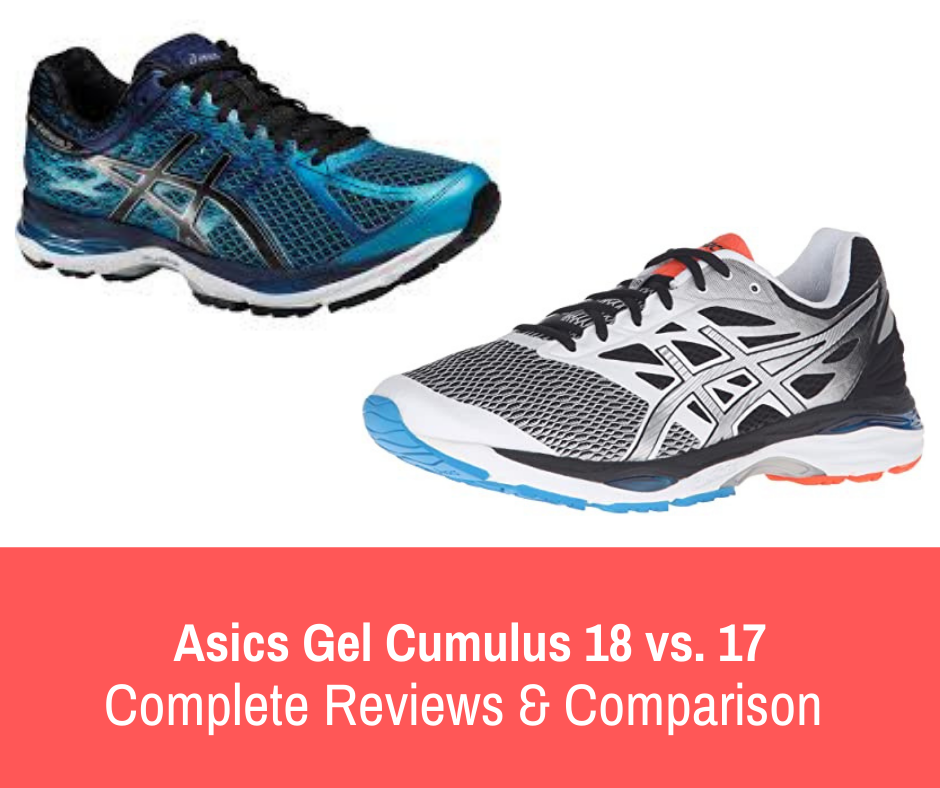 ASICS are always updating its existing running shoes on the market to keep up with the fast-paced market and new technologies in the industry.

This article compares the Gel Cumulus 18 vs 17. First review each running shoe model and gives a comparison between the two.

The Cumulus competes with Nimbus running shoes in terms of running shoes levels for neutral runners. The shoes are well-cushioned, but aren’t as plush and high in finish level as in expensive models. 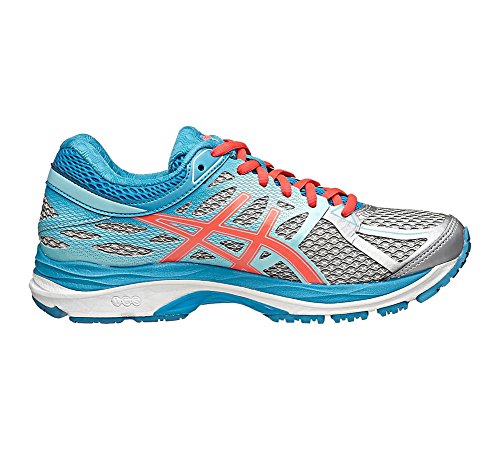 They foster neutral rear-foot strikes whenever your heel hits the trail. The Asics Gel Cumulus 17 is flexible around the forefoot areas, and lightweight. Just like its predecessors, the Cumulus carries on the Asics tradition of slow-paced evolution.

The gel and foam cushioning offers balanced stability and softness for progressive rear-foot strikes without gait correction being introduced. 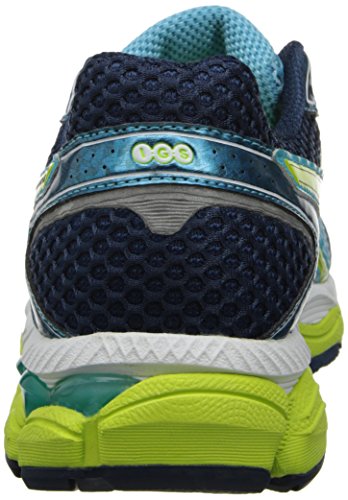 The lateral and medial side densities match, eliminating the foot strike bias. Together with the EVA (Ethylene Vinyl Acetate) strobe and the air foam footbed (‘SP45’ foam), the damping is centered in the heel for smooth transitions to the forefoot.

The padded forefoot contains gel pads sandwiched between the couple of midsole foam layers, with blown rubber on the outsole. The centered cushioning also stabilizes the running shoes in the heel area.

The blown rubber outsole houses a solid forefoot with good grip and wide flare. The rear outsole features carbon rubber with EVA pods at the top, including a crash pad with deep grooves that act independently.

Furthermore, the crash pad works together with the midsole foam and gel pads to cushion your heel strikes, flexing outwards temporarily when landing during runs. It also has a high forefoot flexibility. 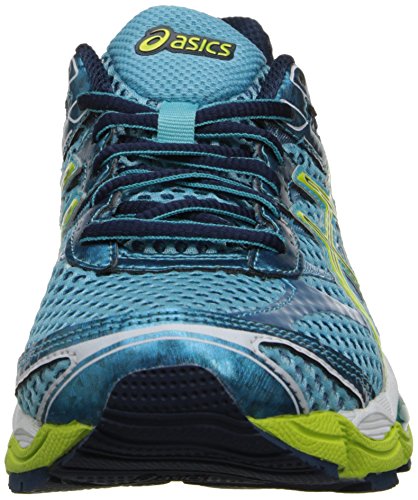 The upper is made from a combination of weld, spacer mesh and synthetic leather medley just as in previous versions of Asics Cumulus running shoes. The toe box features a stand-alone air-mesh except for the single synthetic leather ‘bridge.’

The no-sew overlay is reinforced with stiches sewn across to prevent it from peeling off. Just like its predecessor, Cumulus 16 features stitched-on synthetic punched eyeholes lacing to allow laces to go through. The laces are short with not much left hanging.

The running shoes are breathable with a closed spacer mesh structure. Despite a welded-on and stitched overlay, the mesh is breathable for proper ventilation and good odor. 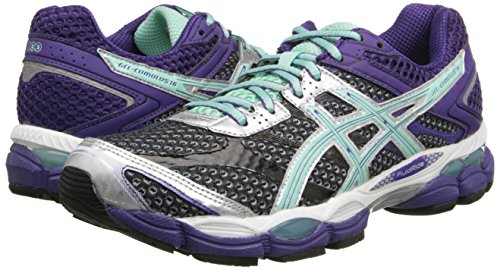 The un-sleeved tongue construction is just as in the shoe’s predecessors. After running for a few miles, the tongue partially moves to one side (a few millimeters) due to the traditional design. It runs true-to-size from the heel to toe area without jamming all your toes forward.

The Cumulus 16 running shoes generally fit snugly. On the lateral side, a synthetic band runs from the small toes downwards, resulting in a slimmer and snugger fit. The shallow and snugger forefoot is more on the lateral than medial side.

The open medial side has a mesh for increased breathability. The inner side, including midfoot area fits easily and feels more relaxed than the form-fitting outer side. Therefore, the upper and midsole don’t offer sufficient arch support.

The hard and narrow internal heel stiffener results in a snug collar. The space between the walls of the collar reduces, increasing grip as it closes in on your foot. Foam padding on the lining on either sides of the shoe provide added comfort.

Whereas some runners love the added snug fit, others find it overwhelming. The Achilles dip is neither soft nor hard to feel. For a shoe that costs about $115, the materials used aren’t top notch, but average.

Users reported poor manufacturing with glue marks being visible, misaligned outsole and midsole rubber bonding, and shifts in embossing. Loose yarns on the upper and poor stitching have also been reported.

The shoes weigh 345 grams, is functional and strikes a balance between being well-cushioned and stability for neutral runners. It also keeps most features from its predecessors, making it ideal for runners who love Cumulus shoes and don’t expect much changes to their favorite shoes.

Despite its high retail price, the shoe may not appeal to advanced runners or athletes with a need for advanced or plush features in their running shoe. It works well for beginner or less experienced neutral runners.

The Cumulus 17 vary in the cushioning system, fit and feel, technique used on the upper construction to differentiate it from other neutral running shoes on the market.

It’s traditional with a legacy design, features a plastic midfoot shank, has a high heel drop, offers soft cushioning, and weighs 12 ounces. However, it’s neither lightweight nor responsive. 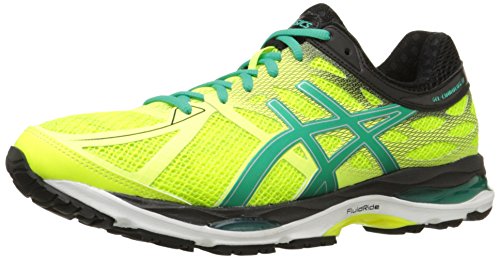 Unlike its predecessor, ASICS Gel Cumulus 17 is plusher, costlier ($120) and delivers softer rides. Just like the Cumulus 16, the running shoes offer a balance between softness and stability. However, its materials are better than those used in its predecessor.

Cumulus 16 wasn’t visually attractive, but offered balanced cushioning; the forefoot and rear-foot weren’t harder or softer than each other. Materials used on the upper were crude and some layering out of place. 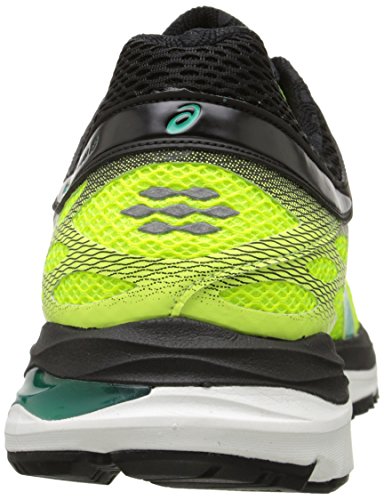 Gel Cumulus 17 rides softer due to design changes in the bottom sections of the running shoes. The midsole foam, forefoot gel windows, and heel Gel inserts and midsole are softer in the Cumulus 17. However, the insole design resembles that of the Cumulus 16.

Just as in its predecessor, the midsole features a dual foam layer stacking with visible Gel windows in between the two layers, but under the heel and forefoot areas. There’s a standard drop in the footbed or sock liner.

The outsole configuration is also similar to the 16 model. The “guidance line” is wider and halved; it’s a chasm that runs from your shoes’ heel to toe areas between the lateral and medial outsoles.

This means that the grooves aren’t as tight as in Cumulus 16 due to increased open space running across the center of the shoe. The midfoot shank “bridges” your outsole or fills visible foam gaps. The larger heel crash pad offers more cushioning.

The shoes’ plastic shank’s lateral side holds more plastic and fills the gap between the rubber ends. The sole units of the Cumulus 16 and 17 are similar in appearance, but function from the inner features of the sole. 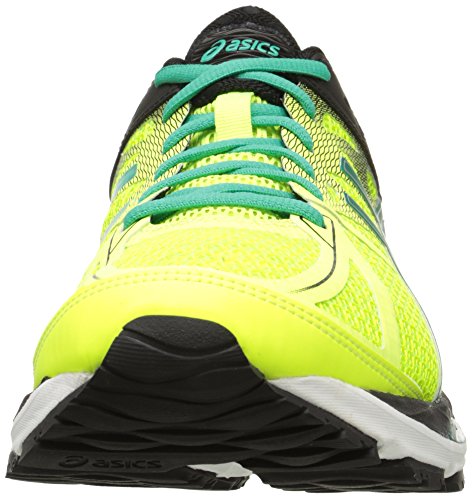 The molded lower midsole is softer than the 16 shoe model. The insole is also cushioned. The insole, and gel units feel softer despite the designs being similar.

The outsole is made from two different materials; forefoot is made from softer blown rubber while harder rubber lugs are used on the heel areas. There’s increased softness in Cumulus 17. Its wear rate and quality of padding differentiate it in terms of density.

The altered crash pad result in more rear-foot splay and increases the area of visible exposed midsole foam. There’s an increase in the size of the heel crash pad, and a larger section available for rear-foot strike splay, resulting in amplified cushioning feel for added comfort.

All these factors define your Cumulus 17’s unique character. The new “guidance line” is wider and more amplified for increased softness. The line is wider, transitioning from the heel to forefoot area.

Both sides of the outsole are separated with wider grooves and the center tends to splay, compressing downwards on weight loading. The changes made on the Cumulus 17 work together to offer the impact of increased softness over its 16 Cumulus design.

Its predecessor depend on a narrower line for Guidance and firmer materials. Changes on the forefoot effect ride character definition. Wider grooves, blown rubber pieces, an insole, and a midsole of lower density work together to deliver softer rides with the Gel windows for a softer feel.

A bigger crash pad, softer foam layers, and softer Gel work together to deliver increased softness. The visible Gel window adds to the cushioning feel of your Cumulus 17 running shoes, contributing to the feel of your lateral heel under loading.

The midsole foam is the major cushioning element in all running shoes manufactured using ASICS Gel, but not a jelly-like substance. The decorative forefoot Gel window also gets softer. 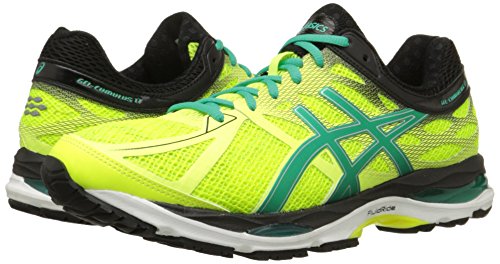 More foam is inside the shoe than gel. The latter is integrated onto the midsole while the forefoot Gel is a decorative eyewash. Based on performance, the running shoe lies on the lower end of the comparison spectrum.

Cumulus 17 delivers softer rides than its predecessor. Insulation between the outsole and the forefoot rubber reduces and the foam gets softer, making the forefoot a concern.

The ride and design of both running shoes is softer. Its predecessor, however, is firmer and more protective. Laces are softer and lengthier, and lining and tongue flap feel more luxurious, with an easier heel grip. Cumulus 17 is narrower than its predecessor.

The material used on the collar lining is the same as what’s on the tongue, atop looking and feeling premium. The lining swap also makes the Cumulus 17 softer with a better fit and feel. The collar fit and feel is awesome.

The collar feel is firmer with a softer upper lining on the heel area.Changes on the upper, a softer tongue flap, and a change in the lining fabric and the upper improves Cumulus 17 over its 16 counterpart.

No-sew overlays replace the stitched-on layering for a sleeker design. Unlike its predecessor, the lines flow better, reducing clutter and improves its general aesthetic profile.

The side of the bigger toe also has more room on the inside. Reduced splay room (also available in D, 2E and 4E), narrower forefoot and a more spacious toe box area is also typical of the Cumulus 17.

The Cumulus 17 isn’t better or worse than the 16 model, but definitely an improved version of the latter. The upper has a better fit and feel with less cushioning balance on the midsole. This means it offers less cushioning and more stability.

However, the price and weight on both models are similar. Although Cumulus 17 has a great upper, the softer midsole compromises the shoes’ stability.